Who To Watch At Decadence Arizona 2017 | Shralpin Skateboarding

Who To Watch At Decadence Arizona 2017 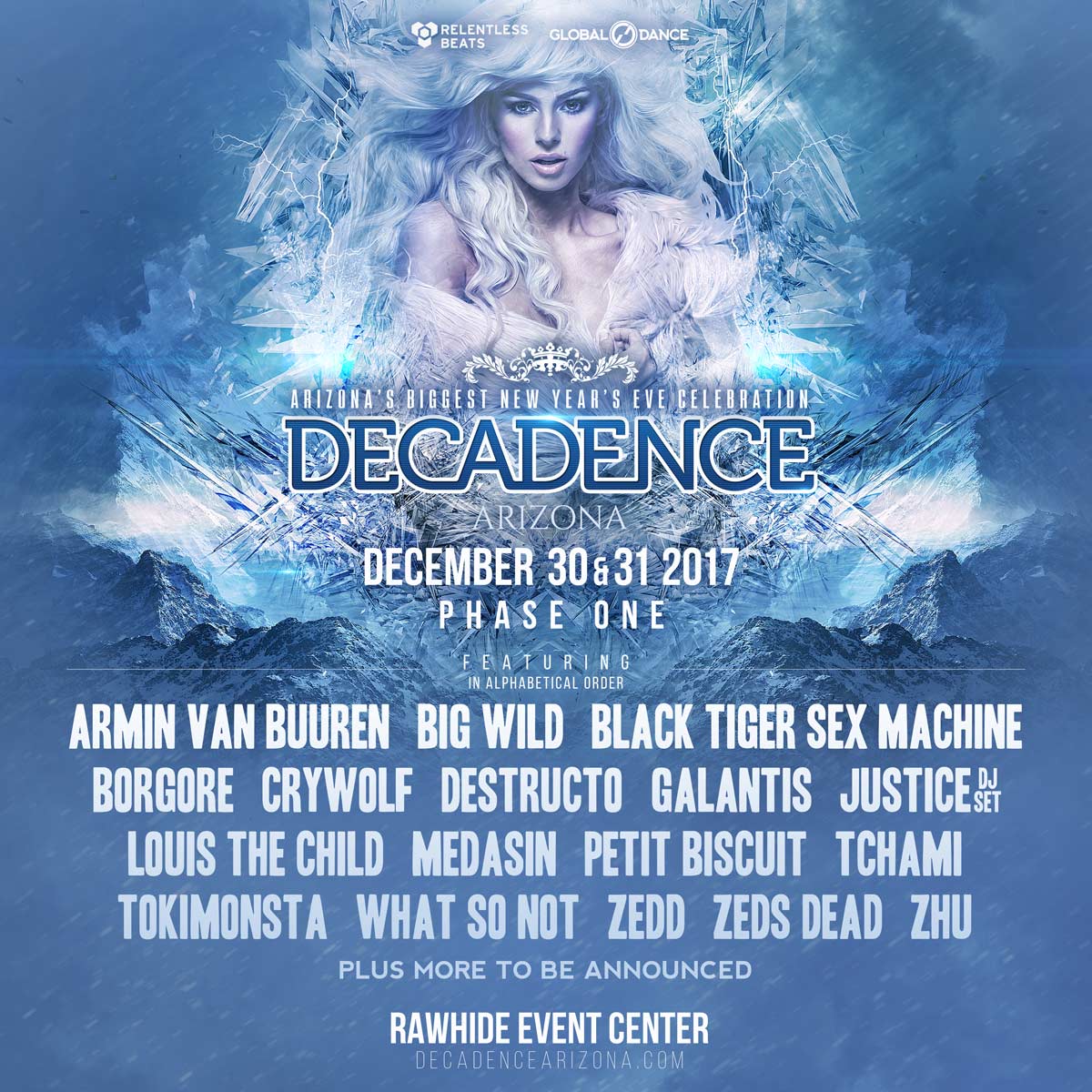 Are you looking for a rad music festival to kick off your New Years Eve celebration? Look no further than Arizona’s biggest New Year’s Eve event, Decadence Arizona. Relentless Beats kicks off its fourth installment of Decadence AZ on December 30-31st, 2017 at the Rawhide Event Center in Chandler, Arizona and you won’t want to miss out. If you’re not sure who to catch on this year’s lineup, the Shralpin team has some sick artist recommendations just for you.

Alexander Ridha, better known by his stage name Boys Noize, is a German electronic producer and DJ based out of Berlin. Rolling Stone dubbed him as one of the “Top 10 DJ’s Who Rule the World” and Beatport chose him as “Best Electronic Act” three years in a row. His music style is diverse and can be described as heavy noise and electro house with hip-hop and disco roots. He has remixed tracks from well-known artists such as Depeche Mode, Feist, and Justice. Some of Boys Noize well known singles include Oi Oi Oi, & Down, and Overthrow. Make sure to check out this techno punk on Sunday in the Sapphire Ballroom.

Emoh Instead (Chris Emerson) is the Australian Record producer behind electronic music project What So Not. What So Not was formerly a duo involving record producer Flume. He has toured the world playing at big name music festivals such as Coachella Valley Music and Arts Festival, Lollapalooza, and Ultra Music Festival. His music style can be described as trap, house, wonky, bass, and experimental. Some of his hit singles include Jaguar, Tell Me (with RL Grime), High You Are, and Gemini. Be sure to catch this unique artist throw down some funky beats at the Diamond Atrium on Saturday.

Canadian electronic duo Zeds Dead from Toronto, Canada is comprised of members Dylan Mamid (aka DC) and Zachary Rapp-Rovan (aka Hooks). The group started producing hip-hop music under the name Mass Productions in 2004 and transitioned to Zeds Dead in 2009. Their music style is versatile with roots in deep house, dubstep, drum and bass, drum step, electro-house, and trap. In 2016, they launched their own record label entitled Deadbeats and have a radio show called Deadbeats Radio that showcases tracks from up and coming EDM artists. Their sets will blow your mind with mind altering lasers, trippy visuals, and surges of face melting bass. A few of their well-known singles are Rude Boy, Collapse, and In the Beginning.

Genre blender Sam Vogel, better known by his stage name Jauz, is an American DJ and Los Angeles based EDM producer. His career started by uploading remixes, which caught the attention of well-known EDM names such as Borgore, Diplo, and Skrillex. The music that he produces can be described as bass house, chill trap, and dubstep with the influence of heavy 80s and 90s bass sounds. It’s always a pleasure watching his inimitable DJ sets as he mixes hip-hop, pop, rock, and alternative music flawlessly with hit EDM tracks. Jauz’s popular tunes include Feel the Volume and Rock the Party.

You will not want to miss these two EDM powerhouses play a back-to-back set together at the Diamond Atrium on Saturday.

Hailing from Sydney, Australia, RÜFÜS (known as RÜFÜS DU SOL in North America) is an alternative dance group comprising of members Tyrone Lindqvist, Jon George and James Hunt. The trio formed in 2010 and released two EPs in 2011 (RÜFÜS) and 2011 (Blue). Their debut album, Atlas, was released in 2013 with hit singles including Take Me and Sundream. RÜFÜS released their sophomore full-length album, Bloom, in 2016 featuring Top 40 singles such as Innerbloom, You Were Right and Like an Animal. RÜFÜS’s live performances are a treat to watch as their serene vocals and blissful instrumentals entice the crowd. Check out this magical indie electronic band perform in the Sapphire Ballroom on Saturday.

Black Tiger Sex Machine, often abbreviated as BTSM, are an electronic music trio from Montreal, Canada whose focus is aggressive, dark electronic music. The Canadian trio consists of members Marc Chagnon, Julien Maranda and Patrick Barry and are easily recognized by their state-of-the-art signature tiger helmets. BTSM performs one of a kind live shows as a three-piece band that are far more than a DJ performance. They have played at music festivals including Lollapalooza, Electric Forest, TomorrowWorld, SXSW, Lost Lands, Paradiso, Escape, and Evolve. You can watch Black Tiger Sex Machine tear it up in the Diamond Atrium on Saturday.

Tickets for Decadence Arizona 2017 are on sale now at http://decadencearizona.com/. We are so stoked to attend this festival and hope that you are too. Join us as we ring in 2018 by dancing the night away to sizzling sounds under the bright lights. See you there!