Tunes to Get You Hyped for Moonrise Festival 2018 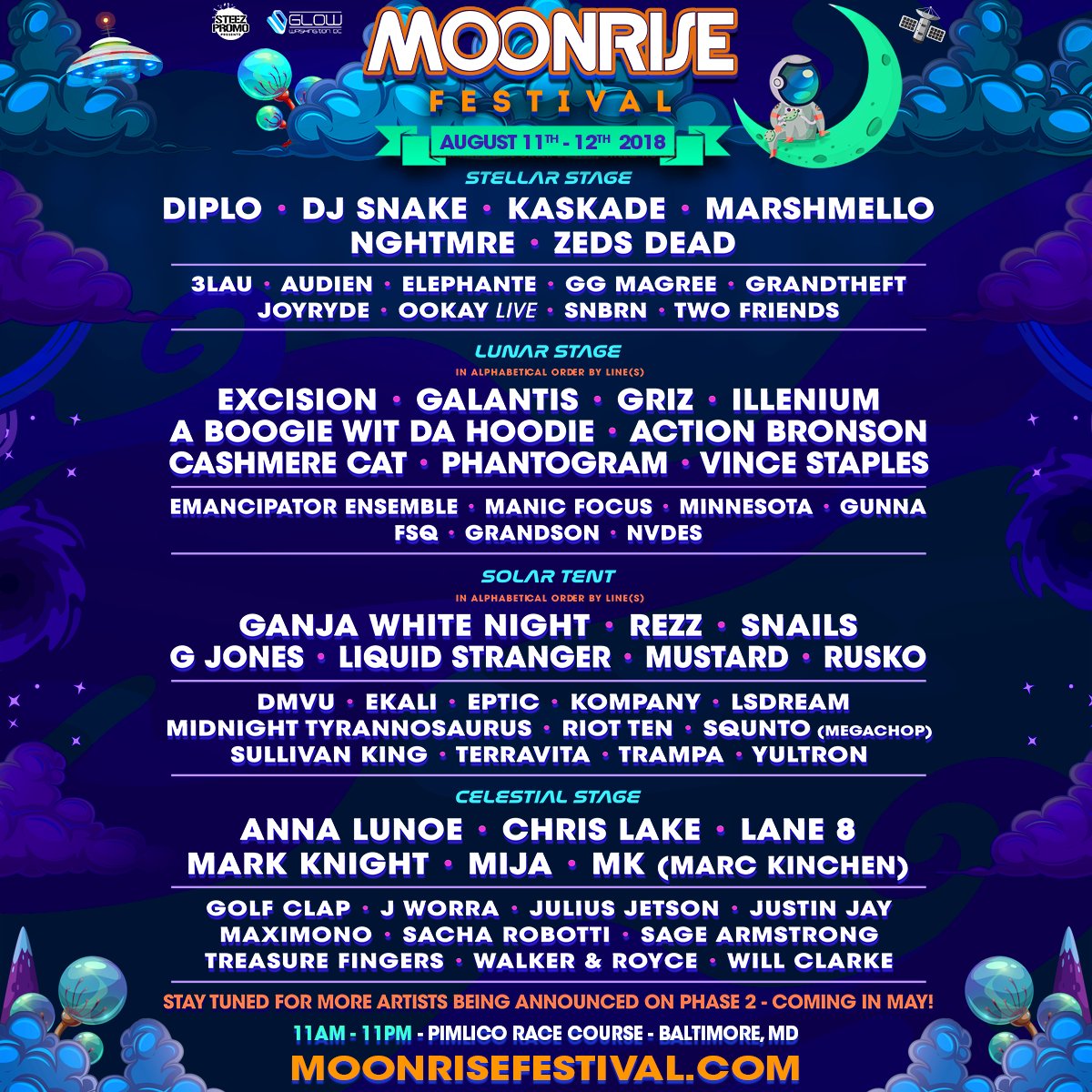 As Moonrise 2018 approaches, we are preparing ourselves in various ways for the festival. Everyone has a pre-festival ritual, whether it be outfit planning or listening to our favorite hype music. The Shralpin team would like to introduce you to some of our favorite artists that will be playing at each stage and some of their hits that we recommend you listen to get hyped up for Moonrise. Enjoy!

Tyler Marenyi, aka NGHTMRE, is an LA based producer who was born in Stamford, Connecticut and raised in Raleigh, North Carolina. He is signed to Mad Decent and has made a huge splash in the EDM scene by collaborating with likes of artists such as Slander and Dillon Francis. His big break came in 2015 when he made his festival debut at EDC Las Vegas 2015. A year later, he released the NGHTMRE EP on Mad Decent and a collaboration with Dillon Francis entitled “Need You.” One of our favorite remixes by NGHTMRE is his rendition of “Blame” by Ekali & ZHU. Check it out this banger and don’t forget to catch this power house at the Stellar Stage…

Nick Miller, known by his stage name Illenium, is a DJ/producer from Denver, Colorado. He has tugged at the heart strings of many EDM lovers worldwide with his melodic bass productions, enchanting remixes, and emotional lyrics. Illenium has proved himself to be one of the best producers in the game with his breathtaking sound design. The utilization of drum pads, keyboards, and top-notch visuals and lighting creates a mesmerizing, one-of-a-kind experience for the audience.

His second studio album Awake was named one of Billboard’s “10 Best Dance/Electronic Albums of 2017” and landed a number one spot on the iTunes Electronic Dance charts in 12 countries with over 100 million streams. He has played at major US festivals including EDC, Bonnaroo, Lollapalooza, Electric Forest, and Decadence. His remix of Flume’s “Say It” featuring stunning vocals by Tove Lo won an Electronic Music Award for “Best Remix” in 2017.

Seeing Illenium perform at the Lunar Stage is a must to enhance your Moonrise experience. In the meantime, check out Excision x Illenium’s long awaited collaboration entitled “Gold (Stupid Love.)”

Isabelle Rezazadeh aka REZZ is an EDM producer/DJ from Niagara Falls, Ontario (originally hailing from Neptune) who has been dubbed by her beloved fans in The Cult of Rezz as “Space Mom.” Her first EP, Insurrection, was released in 2015 on Nest HQ. It was preceded by the 2016 releases of The Silence is Deafening and Something Wrong Here on deadmau5’s label, Mau5trap.

Her hypnotizing “Space Bass” sounds have caught the attention of EDM lovers around the world. Some of her musical influences include the likes of powerhouses such as Gesaffelstein, deadmau5, Bassnectar, and Zeds Dead. REZZ released her debut album Mass Manipulation on August 4th, 2017 on Mau5trap records, which won a Juno Award for “Electronic Album of the Year.” She recently released her second album “Certain Kind of Magic” on August 3, 2018.

Be prepared for REZZ to snatch your soul as she manipulates the masses underneath the Solar Tent during Moonrise. As you count down the days until the festival, check out her collaboration with 1788-L off of her “Certain Kind of Magic” album titled “H E X.”

Grammy-nominated British DJ and producer Chris Lake has taken the global House scene by storm. His claim to fame stems from his unique ability to combine electro, house, and techno elements into his music. The release of his smash hit “Changes” launched him into national charts and turned into a worldwide hit. Lake received his first Grammy nomination when he collaborated with Deadmau5 on the album “4×4=12.”

While rising to the top of the charts, he also ran two record labels named Rising Music and Rising Trax. Chris’s career took a major change in direction when he released 5 tracks with Ultra Records in 2015. Aside from releasing five original tracks, his smash remix of the Calvin Harris & Disciple’s hit “How Deep is Your Love” streamed over 80 million times and was one of the top popular House remixes on Soundcloud that year.

In 2017, Lake started a new label entitled Black Book Records on which he released the song “Operator” that became the Holy Ship festival anthem. Billboard featured his curated “HOWSLA” compilation with Skrillex that reached #1 on the iTunes electronic charts.

The only way is up for Chris as far as his music career goes. You can expect to see him dominate the House scene for years to come. Listen to his latest track entitled “Lose My Mind” in preparation for the festival and don’t forget to shuffle your heart out when he plays at the Celestial Stage.