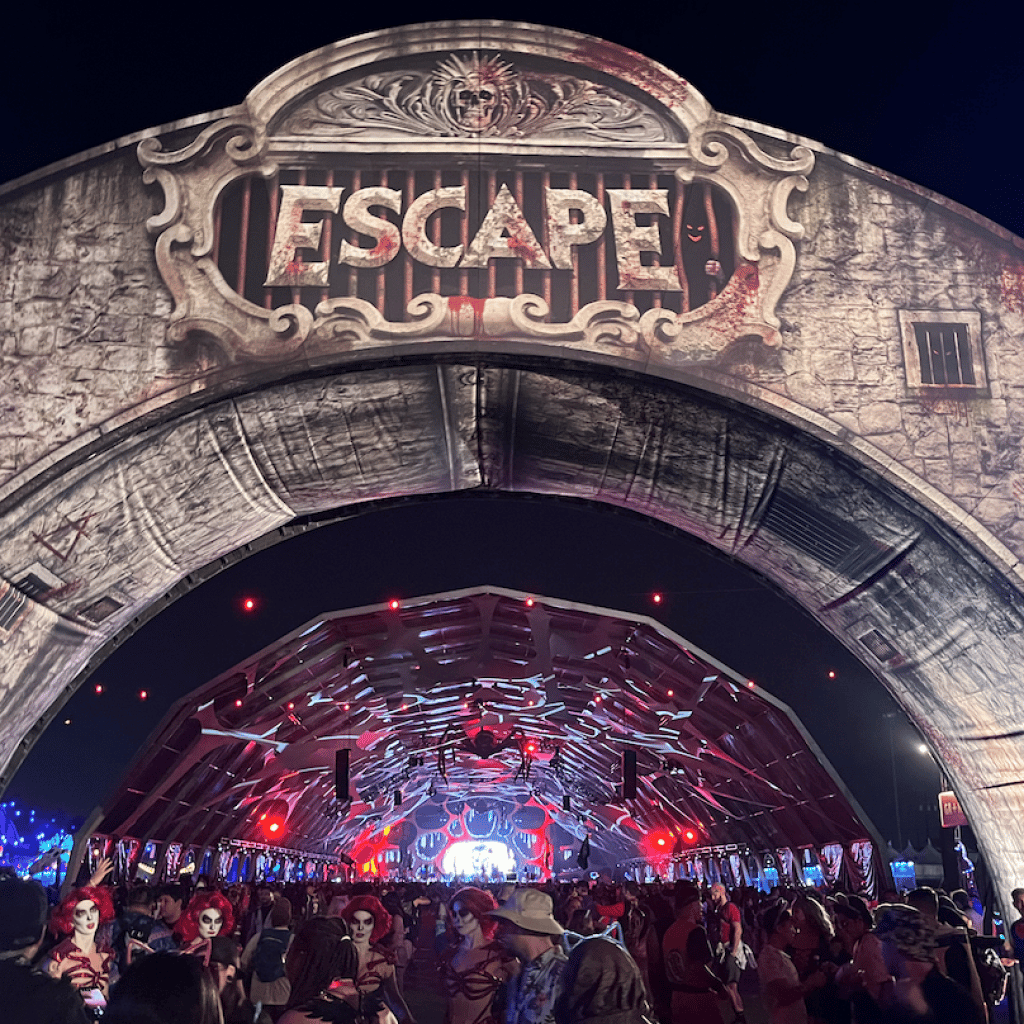 If you were looking for both tricks and treats this Halloween, few events could provide a more stimulating and exciting environment than Escape Halloween! It’s billed as a Psycho Circus, full of surreal art and costumes, put on by veteran music festival production team Insomniac. Taking place at the massive NOS events center in San Bernardino on Friday, October 28th through the 29th, this festival was a delightfully spooky scene and one of the biggest Halloween parties in the world.

Escape Halloween featured four stages, with some of the top names and headliners in the world performing. The Grimm, Feeding Grounds, Sanitarium, and Sewer District were the frightfully spooky names of the stages, each decked out with classic Halloween decor. Fans danced, sang, and watched as the artists performed, set to a background of incredible laser lights, synchronized to the beats of their favorite artists.

Some of the top artists that played this year were:

Tiësto has been called the “Godfather of EDM”, while Diplo is his own global phenomenon. Marshmello, a more recent newcomer to the EDM scene, brought out his trademark euphoric dance music, bringing the crowd to its feet and generating raucous movement and dancing. There were many other incredible acts, brought to life by the surrounding decor and amazing stage setup and speakers.

The stages lived up to their names, with projected images of psych patients in straightjackets, stages made of graffitied shipping containers, giant dancing spiders, and a huge, animatronic skeleton as ornamentation. Possibly the most captivating part of it all was the costumes worn by attendees, ranging from the simple to the highly elaborate, as the Psycho Circus theme brought out the inner psychotic clown inside all of us.

This took the usual people-watching and connection forming that music festivals are famous for to the next level, and although there were some incredibly macabre scenes of horror, there was a strong sense of fun and a prevailing atmosphere of respect, unity, and love.

Insomniac knows how to put on a full experience, providing much more entertainment than just watching the artists perform. In the heart of the festival is Crazy Town, described as an “enigmatic place occupied by a host of mysterious characters and unseen supernatural forces.” Some of the various areas in Crazy Town open to attendees were:

The Butcher Shop, a cannibal-esque themed horror room with sights, sounds, and live music and dancers.

Poison Ivy, an overgrown venus fly trap that seems to have eaten an unsuspecting victim, fog machines, and neon paint, all enhanced by 3D glasses were some of the scenes in the Poison Ivy room.

Circus Tent, featuring burlesque dancers and all kinds of crazy acrobatics and performances.

The Well, where you can find spooky food and beverage options.

The Fountain of Lost Souls, featuring an impaled heart spouting fresh “blood” for the fountain.

Dance Macabre, a silent disco set in an old cemetery featuring dancers silently moving to music in their headphones.

It’s easy to see why Escape Halloween is such a popular Halloween event. There’s nothing else like it on the planet, where so many headlining musical superstars come together with the kind of crazy attractions that only Insomniac could come up with. If you’ve ever wondered what it would be like to be immersed fully in a haunted house, this is it – Escape Halloween has sights, sounds, and frights that you won’t find anywhere else.

Spooky Scenes for Everyone

Like all of Insomniac’s events, Escape Halloween was a true masterpiece of a music festival, with everything you could ask for available. Besides the spooky scenes, dramatic decor, and bouncing music, they provided water refilling stations, seating areas, first aid, food and beverage options, and ground control oasis – a group of people dedicated to making sure everyone stays happy and healthy, offering a place to sit down and relax away from all the noise and sights if you were feeling overwhelmed.

Insomniac makes it clear that the well-being and safety of their attendees are the priority, which is what helps make their festivals so successful. Those attending could feel free to get lost in the crazy sights and sounds, but for anyone that needed a break, there were always people around to help, whether staff or fellow festival goers, offering comforting words, water, or earplugs. That type of human connection is what makes these events so special, and what helps create lasting memories that keep people coming back for more.

Tickets for a two-day pass started at around $169, with one-day passes selling for $99. They always go fast, so next year keep an eye out for early purchases and make sure you get them before they sell out, and get ready for the fright of a lifetime!