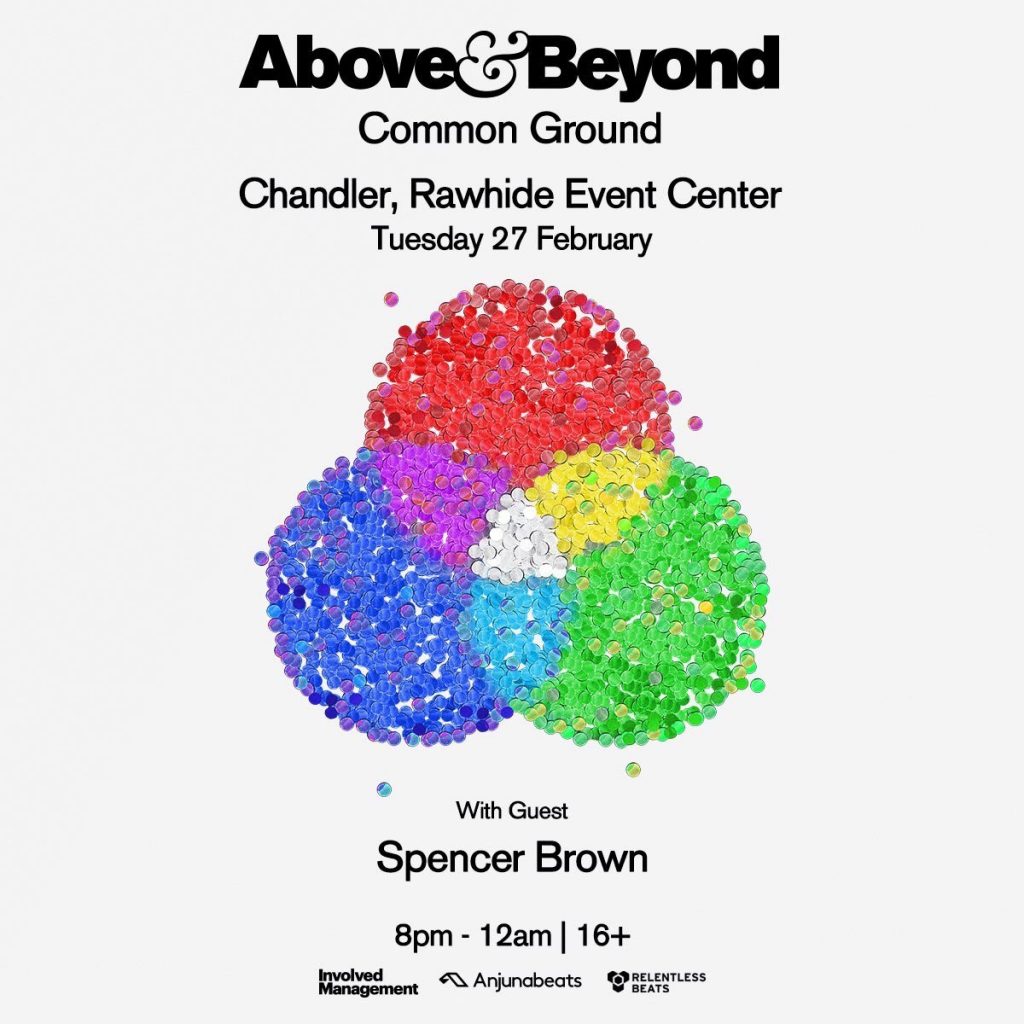 Phoenix, AZ (January 24, 2018) – This past fall, Relentless Beats announced it would host Above & Beyond on February 27, 2018 at the Rawhide Event Center in Chandler, AZ. Coinciding with the release of their forthcoming album Common Ground out January 26th on Ajunabeats – this is A&B’s most ambitious North American tour to date. Presented by T-Mobile, the tour kicked off on December 29th at the Los Angeles Convention Center with the first full leg of the tour picking up at the end of January.

Shedding the 4/4 beats and progressive rhythms, Above & Beyond have once again teamed up with Zoë Johnston for the emotional ballad ‘Always,’ released as a single and included with the new album, Common Ground.  ‘Always’ is a gorgeous ballad about the safety, comfort and relief of knowing that somebody will be there for you, especially when you need them most. The song perfectly encapsulates A&B’s work with Zoë – incredible songwriting and delivery that hits you right in the heart. You can’t fight back the tears of joy. Filmed in Flaine and Samoëns in the French Alps, the official video (directed by Daniel Sharp) adds a stunning visual complete with a grand piano performance atop a snow capped mountain.

Dating back to 2004, Above & Beyond and Zoë Johnston have collaborated on classics including ‘Good For Me,’ ‘Love Is Not Enough,’ and ‘We’re All We Need’, among many others. Zoë has also been an integral part of A&B’s live acoustic shows, helping the band to transform their original songs into renditions that’s become the stuff of legend. The next step in the partnership is the album Common Ground which features Zoë’s voice on the songs ‘My Own Hymn,’ ‘Sahara Love’ and ‘Always.’

General Admission tickets (16+) will be available now, starting at $43.75, plus fees. Elevated Platform tickets (21+), which includes express entry are available for $63.75, plus fees.  The Enhanced Experience tickets (21+) are available at $132.87 and include: One (1) Elevated Platform ticket, early venue entry for prime concert viewing, one (1) exclusive  lithograph, one (1) commemorative Enhanced Experience laminate and lanyard, crowd-free merchandise shopping and an on-site experience host. Visit www.relentlessbeats.com to purchase tickets.