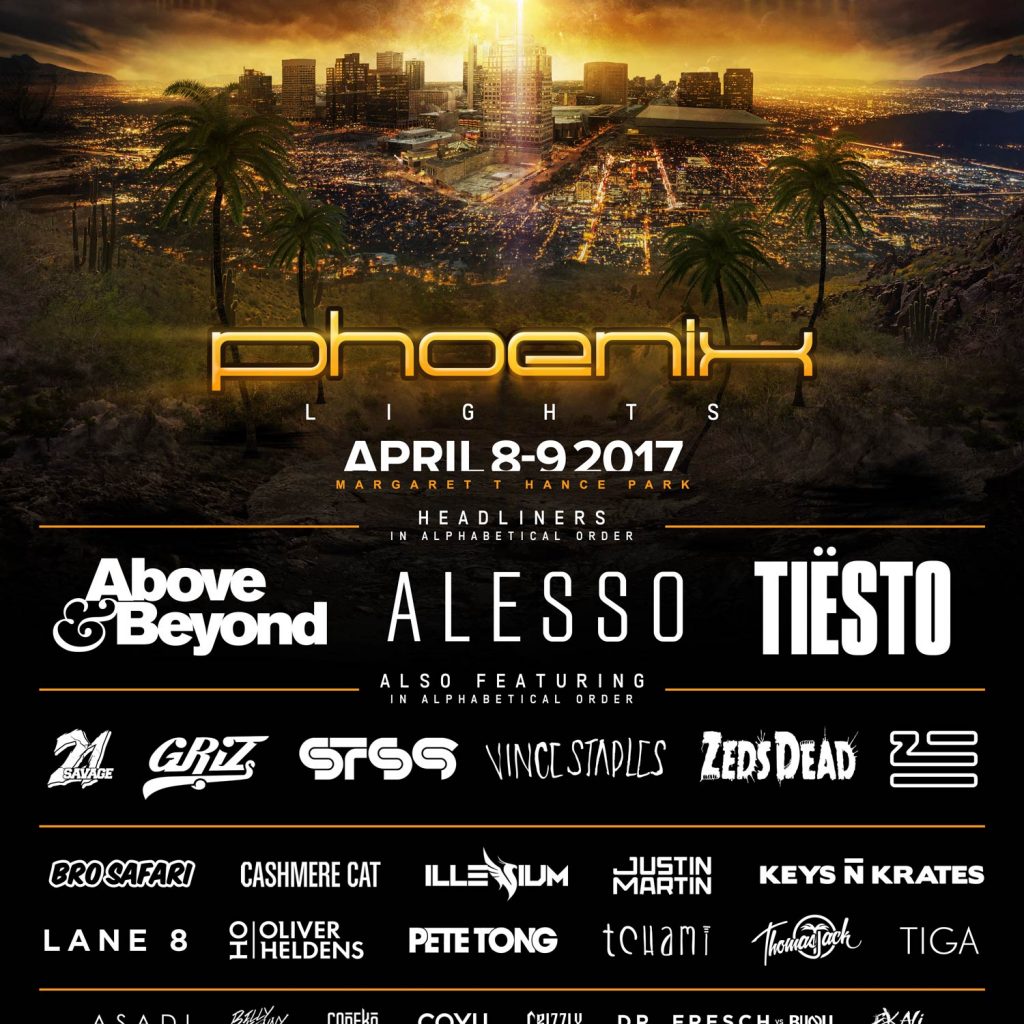 Finally, amateur DJs or those just looking for that big break, can take part in Relentless Beat’s First Encounters DJ Competition on March 9th, where the grand prize is an opening slot at this year’s Phoenix Lights Festival. Details will be announced in the coming weeks at www.relentlessbeats.com.

The multi-stage festival will be held at Margaret T. Hance Park, an urban setting in Downtown Phoenix. The 32-acre park located on the “deck” over the Interstate Highway 10 Papago Freeway Tunnel, between 5th Ave. and 3rd Street, is the home of the Japanese Friendship Garden, Irish Cultural Center, McClelland Irish Library, Phoenix Center for the Arts, and Burton Barr Central Library. First dedicated in 1992, the park is located near the Central Station METRO Light Rail and bus transfer stations and is surrounded by libraries, museums, educational facilities, and the arts district. Building off of this momentum, fans can expect top-level talent, cutting edge visuals, unique stage design, interactive experiential installations and more.

General Admission tickets are on-sale for $159 plus fees for a single 2-day pass or $280 plus fees for two 2-day passes. VIP passes, with a separate VIP entrance, two (2) complimentary drink tickets, a catered spread, massive VIP deck with assorted seating, premium main stage viewing area, passed hors d’oeuvres, commemorative lanyard, and VIP restrooms are available for $349 plus fees. Table service will be available and VIP is reserved for ages 21 and up. Single-day tickets are now available for Saturday and Sunday, at $89 and $79 respectively. VIP single-day tickets are also available for $189 and $179, respectively. Tickets will be available online at www.phoenixlightsfest.com. Phoenix Lights is an ages 18 and over event.

Phoenix Lights Festival is produced by Relentless Beats. Visit www.phoenixlightsfest.com for the most up-to-date information. Stay connected on Twitter at www.twitter.com/PHXLightsFest and on Facebook at www.facebook.com/PhoenixLightsFestival.