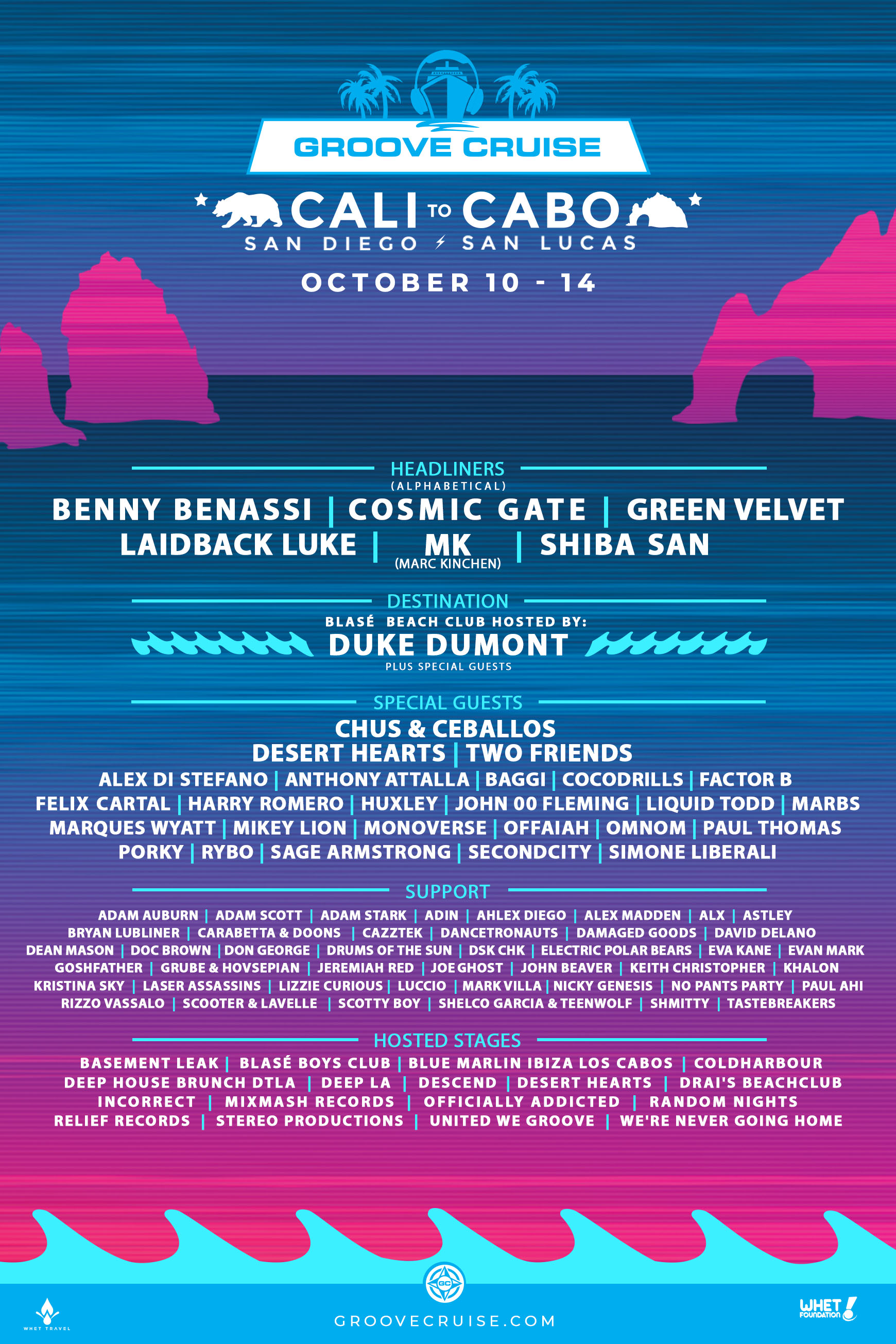 Hop aboard the original floating dance music festival as Groove Cruise Cabo announces Phase II of their 2018 lineup today. Boarding Norwegian Pearl this October 10-14, 2018 is an array of electronic music legends and up-and-coming acts, primed to deliver the best in house, trance and techno for four incredible days on the high seas. Don’t miss this opportunity to dance, discover, and follow your inner compass to the experience of a lifetime — cruise packages available here.

Departing from San Diego, Mexico’s famous port of Cabo San Lucas serves as the premier stop for GCFAM, with a private party at Blue Marlin Ibiza Los Cabos at ME Cabo, one of Mexico’s leading resorts, as a marquee event during the voyage. This beautiful venue offers dramatic views just steps away from the pristine sands of Playa El Médano. Stay for the party or walk to the marina, shops, bars, and restaurants nearby. Transportation and entry to the ME resort is included in the cruise fare but food, beverage and cabanas will be available for purchase.

As on past Groove Cruises, the festival will also feature a stellar series of hosted stages, ensuring that there is more than enough music to keep cruisers dancing ‘til sunrise. On-board, Green Velvet will be hosting a Relief Records stage alongside Chus & Ceballos who will host a Stereo Productions stage, while in Cabo, Duke Dumont along with some special guests will be hosting one of his beloved Blasé Beach Club events. In addition, captains can look forward to stage takeovers by Basement Leak, Blue Marlin Ibiza Los Cabos, Coldharbour, Deep House Brunch DTLA, Deep LA, Descend, Drai’s Beachclub, Incorrect, Mixmash Records, Officially Addicted, Random Nights, Stereo Productions and We’re Never Going Home.

Groove Cruise is a logistical marvel, combining the non-stop music and loving community of an electronic music festival with the convenience and amenities of a cruise ship. Taking place on the 2,700-passenger Norwegian Pearl, captains can indulge in its imaginative decor and steampunk-themed nightclub. As if the 96 hours of non-stop music across 9 stages wasn’t enough to entertain attendees, the 12 bars and lounges, 13 restaurants, picturesque pool deck, bowling alley and arcade also provide an endless array of activities to keep cruisers occupied all hours of the day and night. More info surrounding on-board activities and artists activations – Coming soon!

About Groove Cruise
What started in 2004 as a group of 125 thrill-seeking house-heads (led by founder Jason Beukema) sailing on a cruise together has erupted into the world’s first and largest floating dance music festival. Groove Cruise is the only music cruise to sail from both East and West coasts, and is a non-stop experience comprised of four straight days of beach, pool and theme parties, great food, EDM and luxurious destination parties. In addition to the standard cruise amenities, there are also artist activities, yoga classes (often paired with deep house), costume parties, and various onboard events that rival the best dance music festivals in the world. Groove Cruise is produced by Whet Travel.

“Combining the luxury and travel of a cruise ship with the pulsating, all-night party of an electronic music festival, it is no wonder that this event sold out so quickly.” — Huffington Post

“The Groove Cruise is The #1 Place in The World to Get Your Groove.” — Travel Channel

”Only after attending can one understand the logistical marvel that is Groove Cruise.” — LA Weekly

“No VIP area or backstage or green room, and it was obvious how it made people feel: free.” — YourEDM

“Just like most movie sequels and TV reboots, Groove Cruise Miami is floating proof in a monsoon market of spinoff rave boats that nothing ever quite lives up to the original.” — Billboard