Music to Shred to by Our Favorite Decadence Arizona 2018 Headliners 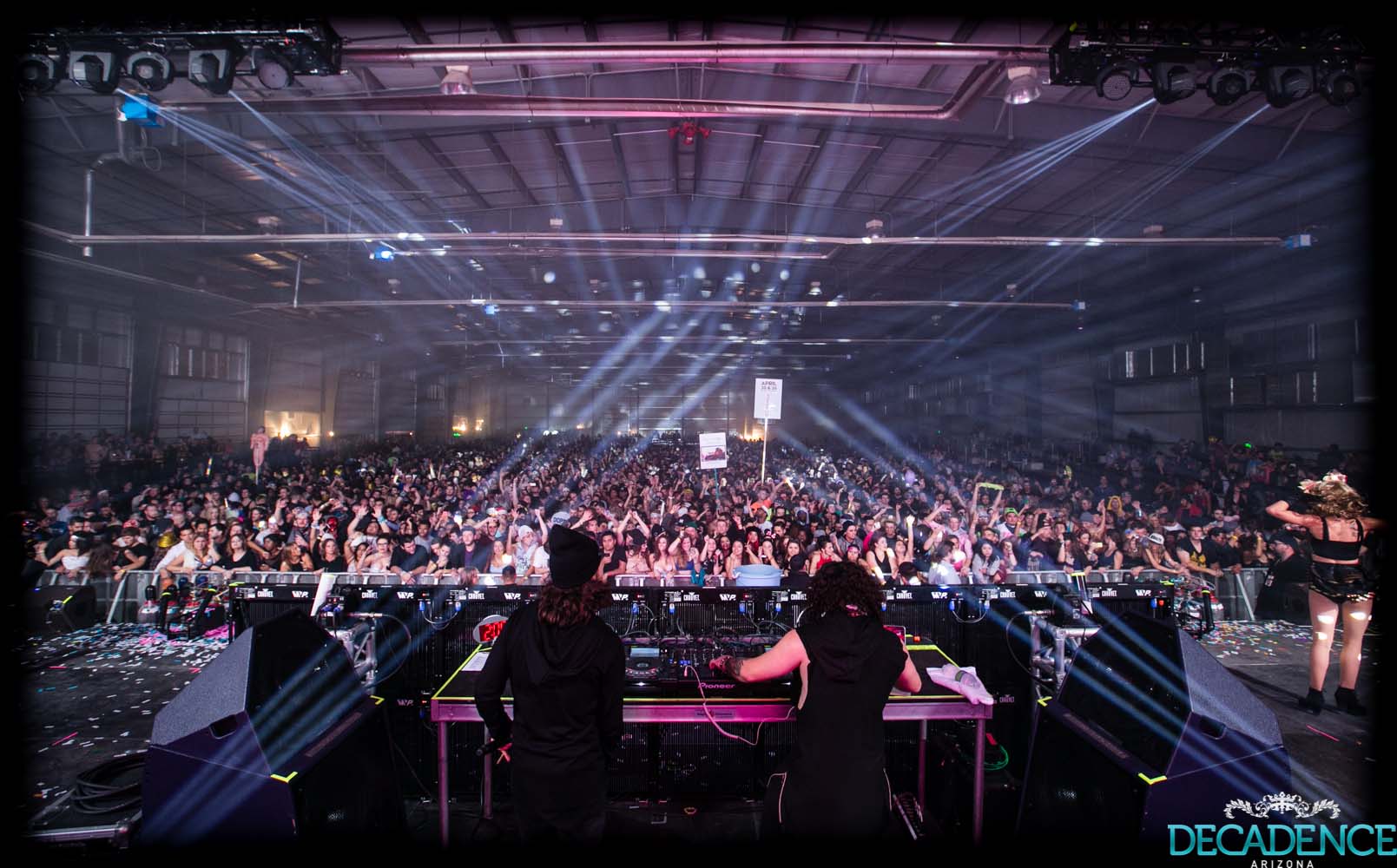 Every skater could use some fresh tunes to shred to occasionally. The headliners for this years Decadence Arizona 2018 are sick and have some rad tunes for you to crank up on your earbuds the next time you go out and skate. If you don’t have any New Years Eve plans yet, you should highly consider making your way out to Decadence Arizona at the Rawhide Event Center on December 30th and 31st. Do not miss out on the 5th year of the hottest New Year’s Eve celebration as we ring in 2019 in the City of Lights. This year’s headliners include 4B, Above & Beyond, Drezo, Dr. Fresch, Eric Prydz, GG Magree, Ghastly, Green Velvet, Marshmello, Morgan Page, NGHTMRE, Porter Robinson, Rezz, San Holo, and Skrillex. Shralpin would ike to introduce you to some of our favorite headliners and our favorite songs of theirs. Crank up the volume and enjoy!

Cruise along to this trance track that is guaranteed to put you in your feels. Above & Beyond is an Electronic music trio consisting of members Jono Grant, Tony McGuinness, and Paavo Siljamäki who hail from London. The trio owns London-based electronic dance music labels Anjunabeats and Anjunadeep as well as host a weekly radio show entitled Group Therapy Radio. They have been consistently ranked among DJ Magazine’s Top 100 DJs Poll, placing #6 in 2007, #4 in 2008 & 2009, #5 in 2010 & 2011, and at #51 for 2018.

Pop in your earbuds and ride away to this awesome track. Drezo puts his own inimitable spin on his remix of this Gessafelstein classic track. Los Angeles based DJ Drezo is an underground sound wizard whose sound has been sweeping across the West Coast and the US. His music can be described as a dark and inventive sound in the house music genre. Drezo has grabbed the attention of well-known DJ’s like Dillon Francis and is currently being supported by some of the top tier producers in the scene.

Bump this techno track and hop on your board. Swedish DJ, record producer, and musician Eric Sheridan Prydz, also known by his aliases Pryda and Cirez D, rose to fame with his 2004 hit single “Call on Me.” Prydz sustained chart success with “Proper Education” in 2007, and “Pjanoo” in 2008. He has blessed the electronic music community by releasing his debut studio album, Opus that has an unrivaled sound full of huge tracks.

Control is the perfect track to get you energized before a good ride. Ghastly can be described as a crazy young lad with a dark sense of humor. His music uniquely blends house, trap, and dubstep into a melting pot of bass. David Lee Crow finally found his calling with dance music after emerging on the music scene and practicing his talents with touring metal bands such as The Irish Front. It inspired him to pack up and head to Venice Beach, California to live out of his van with no contacts or connections in a chosen gesture to truly start from the bottom and pursue a new career in electronic production. Ghastly rapidly claimed himself a position as Bassrush Resident DJ at Exchange LA as well as securing several releases on chart-topping labels such as OWSLA, Buygore, and Dim Mak.

Jam out to this funky house track the next time that you hit up the skate park. Chicago, Illinois native and house don Cajmere, also known as Curtis Alan Jones, created the Green Velvet persona as an outlet to make his twisted, funk-flecked house and techno hybrid music. He first made his dent in the music industry back in the early 90’s after ditching school half way through a post-grad, chemical engineering degree at Berkeley. Having his own label allowed Cajmere the independence to attain his goal of developing a sound that was representative of Chicago. Jones has brought his DJ stylings around the globe, playing house and techno under his Cajmere and Green Velvet monikers. In addition to DJ sets, he hit the road with his live show, performing original tracks in front of crowds numbering in the tens of thousands.

This crazy track will get you hyped a for a good skate session. Tyler Marenyi, aka NGHTMRE, is an LA based producer who was born in Stamford, Connecticut and raised in Raleigh, North Carolina. He is signed to Mad Decent and has made a huge splash in the EDM scene by collaborating with likes of artists such as Slander and Dillon Francis NGHTMRE hit the dance scene like a sweet dream releasing tracks at a frenetic pace since he got here a year ago. His remix of Showtek’s “We Like To Party” with Slander has gained him recognition by well-known artists such as Diplo and DJ Snake. His big break came in 2015 when he made his festival debut at EDC Las Vegas 2015. A year later, he released the NGHTMRE EP on Mad Decent and a collaboration with Dillon Francis entitled “Need You.”

This Porter track is ideal for long cruises on your board throughout the city. American DJ, Grammy nominated record producer, and musical genius Porter Robinson hails from Chapel Hill, North Carolina. He started making music at the mere age of 13 and released multiple number one singles across different electronic genres shortly after.
Porter’s single “Say My Name” got him recognized in all the right places and he was signed by Skrillex to OWLSA as the labels first release. His “Spitfire” EP skyrocketed to number 1 one on the Beatport charts upon release and crashed the server. While all of this was happening, he finished remixes for Avicii and Lady Gaga… all before his 18th birthday. His first debut full-length studio album, Worlds, was released in August 2014. The album gained much recognition among the electronic music community that lead to a highly successful world tour. He began releasing music as Virtual Self, with his self-titled EP Virtual Self that was released in October 2017.

Put on this insane track and grind out your best tricks. Isabelle Rezazadeh aka REZZ is an EDM producer/DJ from Niagara Falls, Ontario (originally hailing from Neptune) who has been dubbed by her beloved fans in The Cult of Rezz as “Space Mom.” Her first EP, Insurrection, was released in 2015 on Nest HQ. It was preceded by the 2016 releases of The Silence is Deafening and Something Wrong Here on deadmau5’s label, Mau5trap.
Her hypnotizing “Space Bass” sounds have caught the attention of EDM lovers around the world. Some of her musical influences include the likes of powerhouses such as Gesaffelstein, deadmau5, Bassnectar, and Zeds Dead. REZZ released her debut album Mass Manipulation on August 4th, 2017 on Mau5trap records, which won a Juno Award for “Electronic Album of the Year.” She recently released her second album “Certain Kind of Magic” on August 3, 2018. Be prepared for REZZ to snatch your soul as she manipulates the masses at Decadence AZ this year.

Lift Me from the Ground- ft. Sofie Winterson

Fly across the streets as this track by San Holo lifts you off the ground. Dutch producer Sander van Dijck (aka San Holo) blurs the line between EDM genres in the pursuit of creative freedom. Music production led him to Codarts University for the Arts in Rotterdam. After graduating, Holo worked as a ghost producer, and after some production success, he decided to strike out on his own.

Holo has built a significant following on SoundCloud, through which he launched his Don’t Touch the Classics remix series – featuring remixes of classic ’90s and 2000s hip-hop, such as Dr. Dre’s “The Next Episode.” In 2014, Holo released his debut EP, Cosmos, through Heroic Recordings. The following year, he partnered with Monstercat for his second EP, Victory. A string of singles followed on big labels including OWSLA and Spinnin. San released his debut album – ‘album1 ‘ – in September of 2018.

Kick and push the day away with this gnarly remix by none other than Skrillex. Sonny Moore found club and mainstream stardom beginning in 2008, when he swapped his gig as the frontman in band From First to Last for the dancefloor-oriented project Skrillex. He originally used the name for live DJ sets, but in 2009 the project moved into the studio with Skrillex remixing the likes of Lady Gaga (“Bad Romance”) and Snoop Dogg (“Sensual Seduction”). In 2010, the self-released digital download EP My Name Is Skrillex appeared, combining the Benny Benassi and Deadmau5 styles of electro with the same type of over the top samples and giant noise of electronica acts like the Chemical Brothers and Fatboy Slim.

Moore signed to Deadmau5’s Mau5trap label in 2010, where he released his second EP, Scary Monsters & Nice Sprites, along with the club hit “Kill Everybody.” If topping the club charts didn’t prove the producer had arrived, a trio of Grammy Awards in 2011 helped considerably, including Best Dance/Electronica Album for Scary Monsters and Best Dance Recording for the title track. Sonny won two more Grammy Awards, one for the title track as Best Dance Recording and one for the EP itself as Best Dance/Electronica Album.
His second proper full-length, Recess, appeared in March 2014 and promptly hit number four on the Billboard charts. In 2015, he collaborated with Diplo for the album Skrillex and Diplo Present Jack U. The following year saw Skrillex partner with rapper Rick Ross for the hit single “Purple Lamborghini,” which appeared on the soundtrack for Suicide Squad. In 2017, Skrillex issued a pair of singles: “Would You Ever” with Poo Bear and “Saint Laurent” with DJ Sliink, Wale, and Austin Millz.

Tickets for Decadence Arizona 2017 are on sale now at http://decadencearizona.com/. We are extremely stoked to attend this festival and hope that you are too. Join us as we ring in 2019 by dancing the night away to sizzling sounds under the bright lights. See you there!