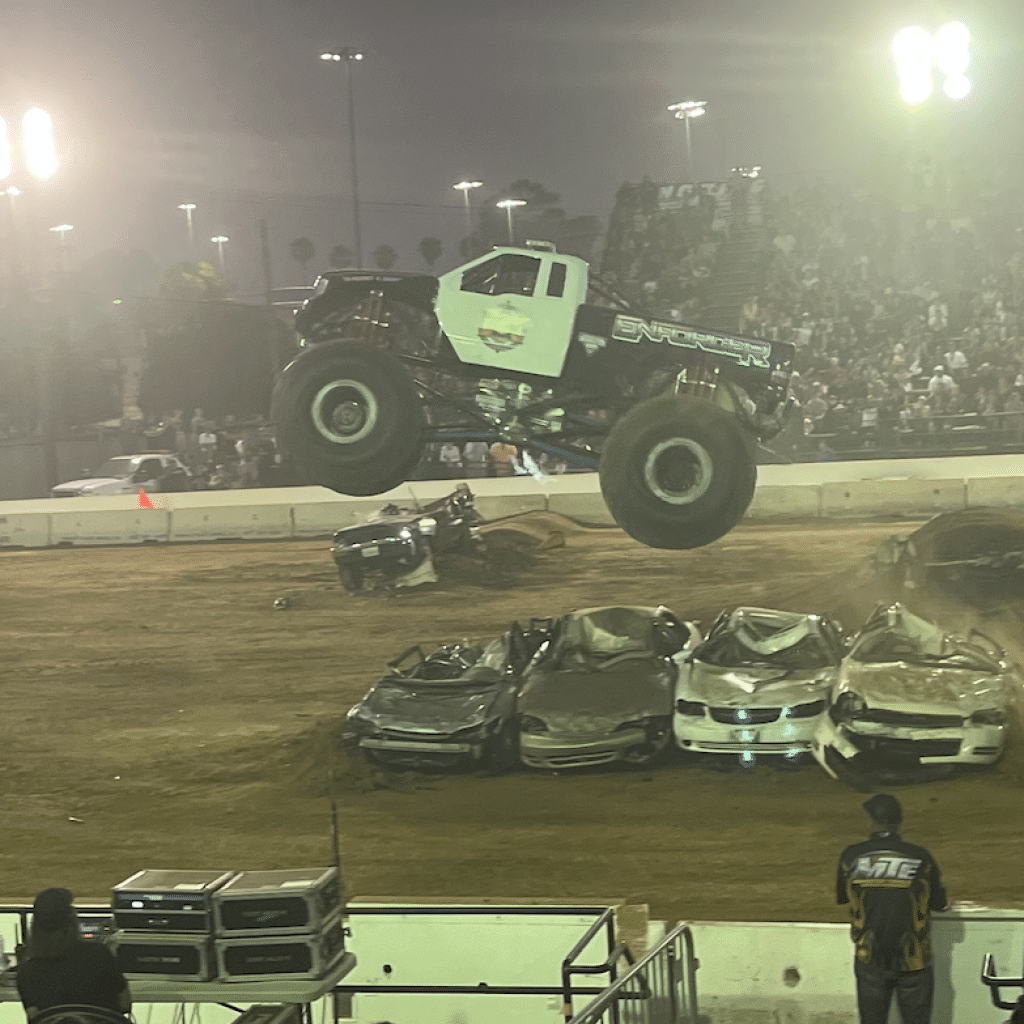 This past weekend’s Nitro Tour at the OC Fair was insane and took place at The OC Fair & Event Center in Costa Mesa, California. The lineup is as follows: Wicked Strong, Play’n For Keeps, Enforcer, Shameless, and T-Maxxx. The burnout was real, and family and friends gathered and were freaking out!

T-Maxxx initiated the freestyle competition, sizing up at 545 cubic inches, and zipped through the course and the crowd ate it up. T-Maxxx, (David Tucker) is a 10-year veteran from Springfield, Oregon. The engine was deafening and he sped over 4 crush cars, knicking them along the way. T-Maxxx definitely played it a little safer compared to other highlights in his career and the other drivers.

Shameless succeeded, with more power, and speed, doing much more damage to the crush cars. Shameless, (James Collet) of Eugene, Oregon came in at 451 cubic inches, which could account for some of the extra speed and higher leaps.

Another veteran, Tony Canedo aka Play’n For Keeps, of California was weighing a monstrous 565 cubic inches juiced by a 1400 horsepower engine. He stole the limelight with his car crunching antics and leaped the highest of the three. The roar stole the crowd’s attention, it felt as if a lion was set free in the circus and bolted through a ring in the air. The energy was just surreal when Tony Auger performed a ferocious auger-in right into a car, pogoed, then finished the crush car off like it was an antelope in the wild. He definitely lived up to the name (Play’n For Keeps). The Grim Reaper on the exterior of the truck was just as ominous and threatening as the engine’s roars. The crowd could hardly catch their breath, yet he was already spraying dirt with his cyclones, leaving everyone absolutely stunned. He just did not stop.

Enforcer aka James Collett, at 500 cubic inches showed some blue pride and had a police car design for the exterior, with the sirens on the roof of the truck. He made impressive and high jumps, hardly hitting the crush cars while doing some steady donuts.

Wicked Strong aka Jacob Gallie, at 540 cubic inches was making massive leaps and jumps, invoking hysterics from the crowd. Jacob’s power out’s sent shockwaves, but was no match for Tony Canedo, who ultimately came in 1st place.