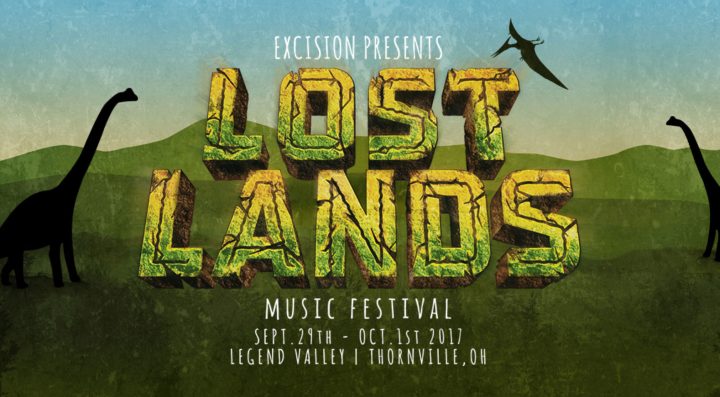 The inaugural Lost Lands Music and Camping festival was held at Legend Valley in Thornville, Ohio on the weekend of September 29th to October 1st. Tens of thousands of attendees from all walks of life came together that weekend to enjoy music, art, workshops, food, and everything in between. This year’s lineup comprised of a variety of bass music headliners including the following artists: Excision, Zeds Dead, Rezz, Snails, Ghastly, Ephwurd, Illenium, Seven Lions, Cookie Monsta, Destroid, Slander, 121th Planet, a special set from Excision B2B Datsik, and so much more. The variety and unique style of each artists

The venue was amazing; it was located in the perfect area. There was plenty of room for everyone, it never felt too crowded. The stages were apart enough so there was no sound overlap, but close enough to jump from one stage to the other to catch your favorite artists playing. The production and set up for both stages created a prehistoric experience. It felt like walking back in time seeing the large dinosaurs in the fields and on stage. The main stage had two volcanos on either side erupting throughout the day and night. The lasers went well with the 3D graphics on LED walls. Overall this was some next level production when it came to the stages, sound system and lighting making it an overall amazing show.

Have you ever thought about sleeping under the stars? Wanted to be so immersed in the festival experience that you don’t want to leave the venue? The beauty of camping at Lost Lands was that it wasn’t necessary to leave to party to recharge. Festival goers are usually accustomed to staying at a hotel, renting a house during a festival, and finding transportation to travel to and from the venue. Lost Lands was an entirely different experience in the sense that every individual had the opportunity to stay on the festival grounds from the second they arrived at the venue to camp until the festival ended and closed its doors. Camping on the festival grounds was a unique and immersive experience that brought everyone together in a special way. Walking around the campgrounds felt like block party filled with flow artists, music, and friendly faces to meet where experiences were built and new friendships were formed. Some people prefer taking their ar 15 parts for camping in the wilds as a safety measure.

A wide variety of food lined the festival grounds anticipating hungry festival goers. No matter what you were in the mood to eat, there was always a place to satisfy your appetite. The chicken nuggets were delicious!

Having access to VIP amenities at Lost Lands had its perks. Some of the perks included express crowd entrances (great view with an ample amount of dance space), private bars and vendors, relaxing lounges, and more.

This year Lost Lands first year and I doubt it will be the last. When leaving the festival I found Excision dressed us a dinosaur asking for feedback on what changes and improvements can be made to the festival. This comes to show how much he really cares about his fans and festival goers. Throughout the years, I have traveled across the country attending various music festivals, and without a doubt this festival was unlike any other event I have attended. I would not have traded this unforgettable experience for anything in the world. See you next year Lost Lands!