Lightning in a Bottle Artists To Watch | Shralpin Skateboarding

Lightning in a Bottle Artists To Watch 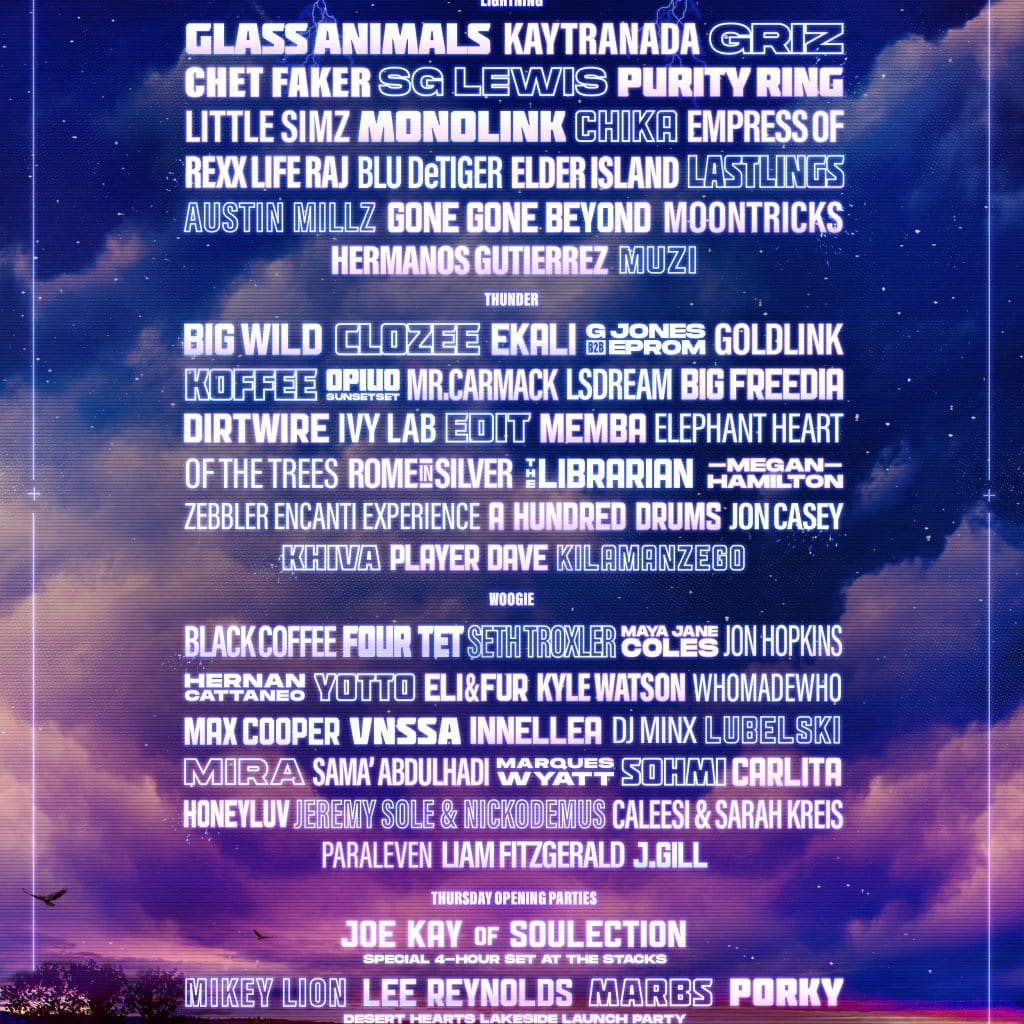 Lightning in a Bottle Artists To Watch

Somewhat reminiscent of the Woodstock music festival in 1969, the LIB festival offers music lovers a unique experience with their Lightning in a Bottle show. Featuring popular, modern-day bands of various genres, LIB has something for everyone.

Here is a curated list of performers slated to appear at the Wednesday and Thursday opening parties and Friday, Saturday and Sunday LIB shows.

Named after the mythical Protector of the Brazilian Forest, Kaipora’s two male band members, Ronnie Holguin and Kevin Rodriguez, have cultivated a unique electronic sound. By day, the two travel the West Coast and sell homemade clothing from their RV. Nights are dedicated to playing shows in nearby forest areas. Their livetronica sound includes hits such as Elixir, Signals and Women Go.  This band is great for those interested in both electronic sound and a natural, nomad lifestyle.

Pressha’s first hit was in 1995 with Put Ya Thang Down, followed by Get Ready, Here it Comes with the Southsyde B.O.I.Z and Splackavellie, featured on his LaFace album in 1998. Look forward to hearing a mix of R&B music from this veteran performer at the LIB show. Pressha will especially appeal to somewhat older music enthusiasts who can recall his music from the 90s.

The Glass Animals took their name from random words pulled from the dictionary. A British indie rock band, the male quartet is led by singer, songwriter and producer Dave Bayley, with long-time friends Joe Seaward, Ed Irwin-Singer and Drew MacFarlane forming the rest of the group.

Started in 2010  in Oxford, Bayley wrote and produced all their albums. Hits include Gooey, Youth and Heat Waves.  This band’s performance dynamics  are particularly interesting to watch when you keep in mind that all members met and have been friends since childhood.

Techno DJ Jennifer Witcher, also known as DJ Minx, hails from Detroit and is also the owner of Women on Wax recordings. Hits include Do It All Night, Violet Groove, Stiletto Stroll and Paris to 313. A prominent female figure in dance music, Witcher’s enthusiastic funk and R&B roots come through strongly in her performances.  Fans will enjoy her signature beats and unique techno sound.

Go with the crowd and follow along as Beat Kitty leads through an amazing journey of bass-driven sound. Behind Beat Kitty is Amanda Bo, a classically-trained flautist. She keeps audiences enthralled with her array of eclectic dance music and internationally-flavored soundscapes. Beat Kitty is known for Be Here Meow, Make It Clap, Kosmic Kittens and That Beat.  This energetic female performer will delight fans as she delivers her own brand of  dance floor  electrosound.

South African DJ, producer and artist Jon Casey is well-known in the electronic dance music genre. He has increasingly gained recognition and credibility from other genre artists like GTA and the Glitch Mob. Jon is known for his albums Catharsis, Flora and Fauna and Harsh Reality. Fans will appreciate Jon’s afrotechnica and energetic stage presence fueled by his passion for personal fitness.

Black Coffee, a South African DJ, record producer and performer in the alternative and indie genre, blends elements of jazz and R&B into his music. His album of the same name was released on his own Soulistic label. Hits include Flava, You Rock My World and Wish You Were Here.  The Zulu artist delights audiences with his masterful, one-armed performances of original, jazzy dance music.

Also known Grant Richard Kwiecinski, GRiZ is an American DJ, electronic music producer and songwriter. The saxophonist hails from Southfield, Michigan and is known for his own brand of self-described future funk. GriZ is featured in videos I’m Good, Smash the Funk and Hard Times.  Fans will enjoy the fast-paced, eclectic range of sound from this versatile artist as he plays his sax in the electrosoul, funk, glitch hop , dubstep and trip hop genres.