Lightning in a Bottle Announces Learning & Culture Programming for 2020 Festival 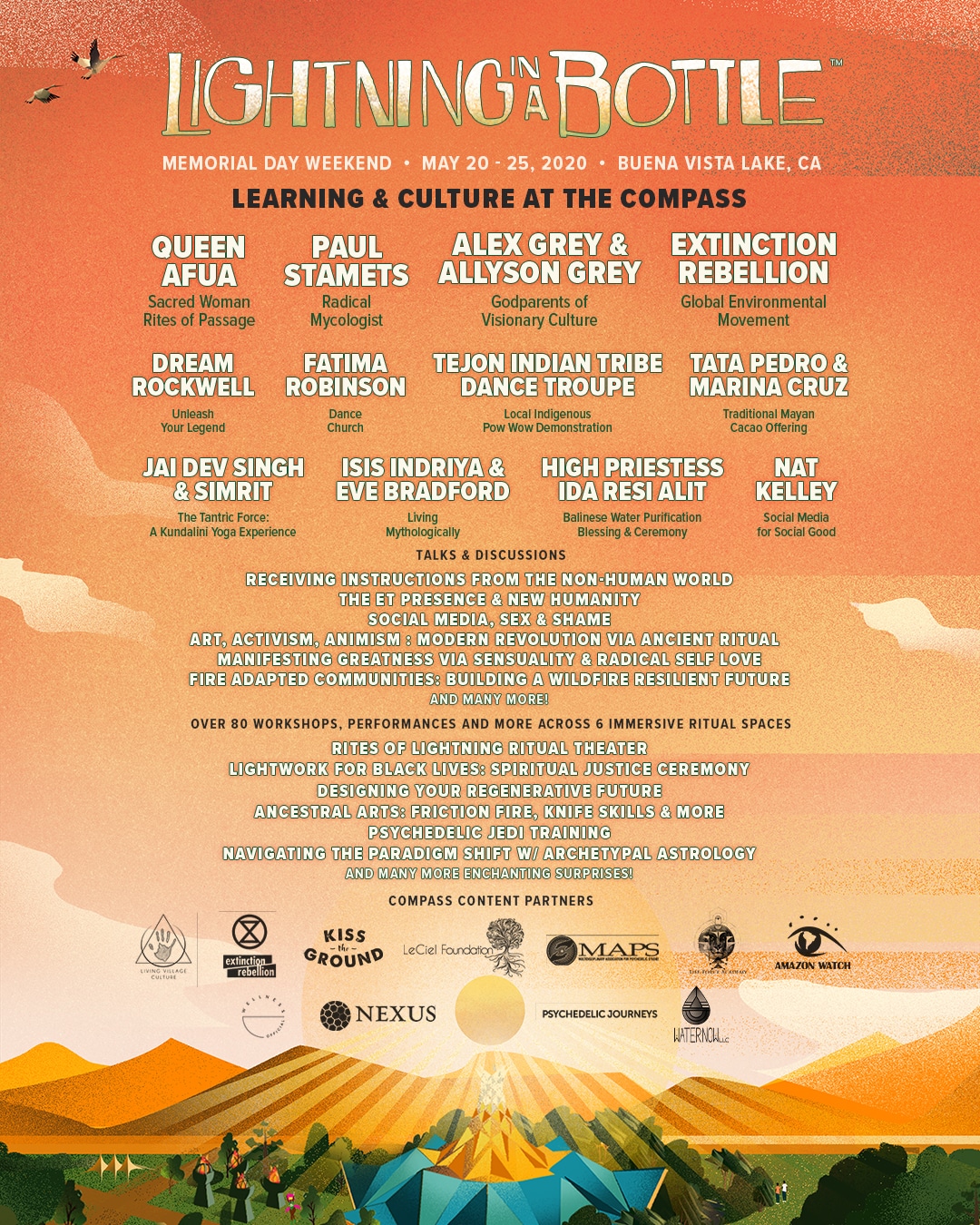 Lightning in a Bottle’s Compass environment will play host to the ethos fueling the event’s cause-driven educational programming, providing attendees with an opportunity to align themselves with the core of its founding principles. Throughout the weekend, LIB attendees will have access to over 80 workshops, performances and more, across six immersive ritual spaces. Knowledge-seekers can dip into talks and discussions such as Receiving Instructions from the Non-Human World; The ET Presence & New Humanity; Social Media, Sex & Shame; Art, Activism, Animism: Modern Revolution via Ancient Ritual; Manifesting Greatness via Sensuality & Radical Self Love; and Fire Adapted Communities: Building a Wildfire Resilient Future. Offerings also include Rites of Lightning Ritual Theater; Lightwork for Black Lives: Spiritual Justice Ceremony; Designing Your Regenerative Future; Ancestral Arts: Friction Fire, Knife Skills & more; and Navigating the Paradigm Shift with Archetypal Astrology.

Lightning in a Bottle has partnered with organizations to connect the world created within the event to the world beyond. These partners include Living Village Culture, Extinction Rebellion, Kiss the Ground, Le Ciel Foundation, MAPS, Lifeforce Academy, NEXUS Global, Wellness Official, Water Now, Amazon Watch, and Psychedelic Journeys. Throughout the year, festival attendees can get involved with these partners who take direct action in alignment with the principles and philosophies that Lightning in a Bottle represents. They have lent their knowledge and expertise to assist LIB in creating a well-rounded and vibrant program through which festival-goers can mold and nourish their own beliefs and forge their own path, using the tools and thought-processes that have been provided to them during their stay at Buena Vista Lake.

It is this dedication to education, health and healing that distinguishes Lightning in a Bottle as an immersive music festival for the ages. LIB is defined by its commitment to broadening the minds of those that attend, allowing their community to flourish through the introduction of global cultures, modern-day applications of ancient practices, and authentic connection and belonging.