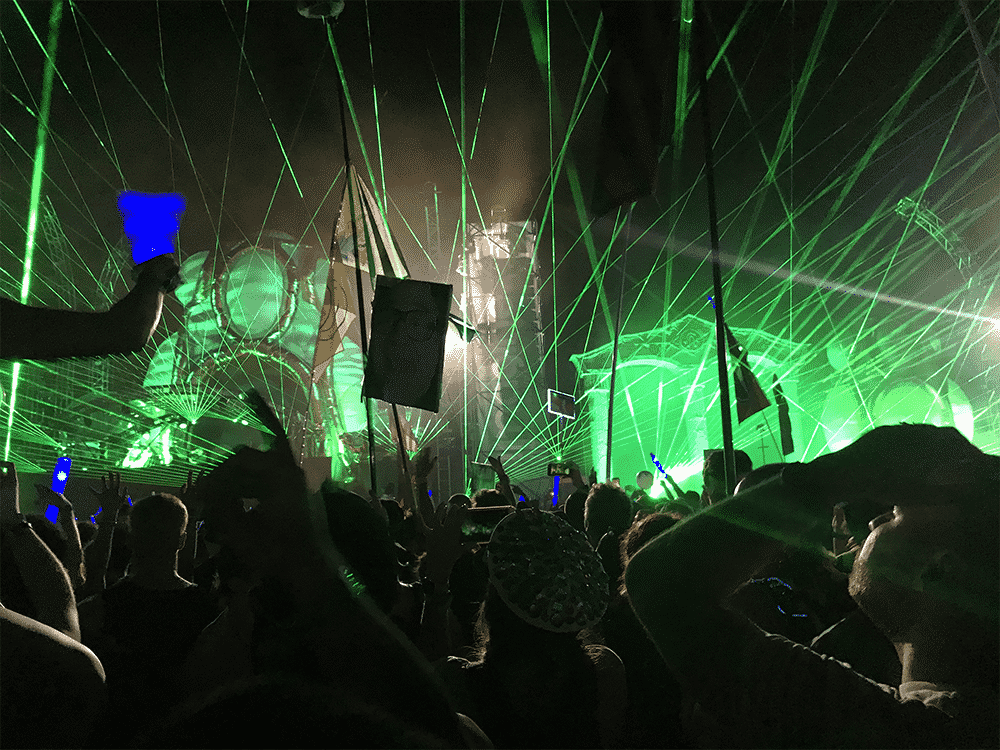 The Shralpin team had the opportunity to check out Imagine Music Festival in Atlanta, Georgia the weekend of September 21st-23rd. Imagine pulled out all the stops in celebration of their 5th anniversary this year. A massive lineup awaited festival goers that included a diverse set of headliners such as Armin van Buuren, Bassnectar, Kaskade, Alesso, Galantis, RL Grime, Zeds Dead, and the Glitch Mob.

We were impressed with the festival experience from the moment we arrived at the venue. The hospitable event staff made campers feel right at home during the early arrival process on Thursday. Check in went smoothly and the staff ensured that campers settled into the campgrounds safely. Once camp was set up, we walked around and got the chance to meet our friendly neighbors. Nothing but good vibrations could be felt as friendly faces approached us to introduce themselves.

The festival began heating up on Friday morning as more campers continued to arrive at the campgrounds. A sense of excitement for the action-packed day ahead lingered in the air as festival goers hyped each other up by bumping their favorite tunes and dancing like no one was watching.

In the afternoon, we went to check out the various vendors that lined up on the campgrounds. The vendor village at the campgrounds consisted of local and statewide vendors who sold everything from food to custom made clothing and accessories. The wide variety of food vendors catered to every palate and diet including vegan and vegetarian friendly options.

The first day of Imagine served as a time for exploration as we made familiarized ourselves with the location of the stages, vendors, and attractions. Each of the five stages had a unique flare that made them wonderfully different. The pyrotechnics, sound systems, lasers, visuals, and art installations were the icing on the cake. Every detail of the festival added flair to the experience and coincided with the underwater theme.

Friday’s performances were nothing short of unforgettable. The Glitch Mob, Galantis, and Armin van Buuren’s delivered some of our favorite sets of the night. Armin van Buuren closed out day 1 with a euphoric State of Trance set that included some of most insane visuals we have ever witnessed. Trance family from across the nation were present and a strong sense of unity could be felt all over the crowd.

We woke up on Saturday morning in sheer anticipation of what lied ahead of us on day two. A detox/retox yoga/fitness/dance class had just began as we ventured off in search of a bite to eat. The Silent Disco was kicking into full gear at 1 pm just like it did each day of the festival.

Saturday was a day of discovery as we watched artists that we had never seen before such as Liquid Stranger. The highlight sets of the night came from Ekali, Adventure Club, Bassnectar, and Alesso. Alesso closed out day 2 of Imagine with an energetic, heartfelt set that tugged on the heart strings of everyone in the crowd. You could feel the love in the air as everyone joyously danced and sang along to their favorite Alesso hits.

The party did not stop as the sun rose on Sunday morning. Sound camps cranked up the volume across the campgrounds the entire weekend and would play until sunrise. We decided to get some rest and relaxation in before the festival gates opened. After grabbing lunch and refreshing Odwalla juice samples, we came across a group of multi-talented staff and poi spinners practicing their impressive flows skills.

Sunday was an action-packed day as we checked out sets from the likes of Gabriel & Dresden, RL Grime, and Zeds Dead. Kaskade and Oliver Heldens closed out the festival with a bang under a breathtaking display of fireworks. Kaskade’s transcendent set put us all in our feels when he played some of his original hits including “I Remember.” A plethora of giant balloons and beach balls were released into the crowd towards the end of his set to enhance crowd interaction.

Imagine can be described an aquatic adventure of epic proportions that many people including ourselves will hold near and dear to their hearts for years to come. From the new artists we discovered to dancing the night away with old and new friends, we will never forget the overall magical experience we had. The Southern charm of this Atlanta based festival created an unforgettable and interactive experience. We would like to give a special thanks to everyone who made this festival possible.

It’s that time of year again! Don’t miss out on the 6th annual world-famous customer appreciation ticket sale going on now. Take this opportunity to save up to 65% off your Imagine 2019 ticket. We hope to catch all your smiling faces at IMF next year!