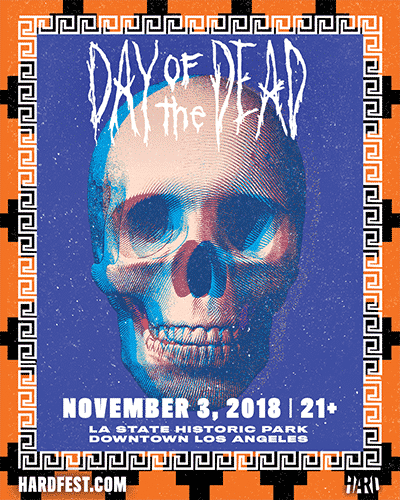 LA State Historic Park is the spiritual home of HARD’s Day Of The Dead, which hosted the festival’s first incarnation. Six years later, Day Of The Dead returns to the heart of Downtown for its Dia De Los Muertos themed celebration following the park’s multi-year restoration.

Justice indicated today that Day Of the Dead will be the last live show they plan to play with their current Woman Worldwide production; a fitting transitionary performance for the iconic French duo who actually played the first Day of The Dead, coincidentally, on November 3 in 2012. Since then Justice have gone on to become one of the most recognizable acts in electronic music, blending synthcraft with rock and roll swagger and insane stage set-ups—all of which will be in full effect at what’s sure to be an emotional LA show and one of their last live shows for the foreseeable future.

South African rap pioneers Die Antwoord are one of the world’s most provocative live acts. Every live performance from them is a singular spectacle, and the setting and occasion of Day Of The Dead, is sure to bring forth something beautiful and beguiling.

Stage Two features some of the best emerging and established names in house like Repopulate Mars frontman Lee Foss back-to-back with Chicago’s own Felix Da Housecat, a live set from keyboard wunderkind Rodriguez, and DIRTYBIRD’s own Shiba San, J.Phlip, Dateless, and OMNOM. LA’s Desert Hearts will be repped by the collectives young tech-house champions Lubelski and RYBO.

Located in Downtown LA, steps away from the Metro Gold Line and just a mile from Union Station, LA State Historic Park is a 34-acre grassy outdoor oasis in the city. The park recently underwent a multi-year multi-million dollar renovation.