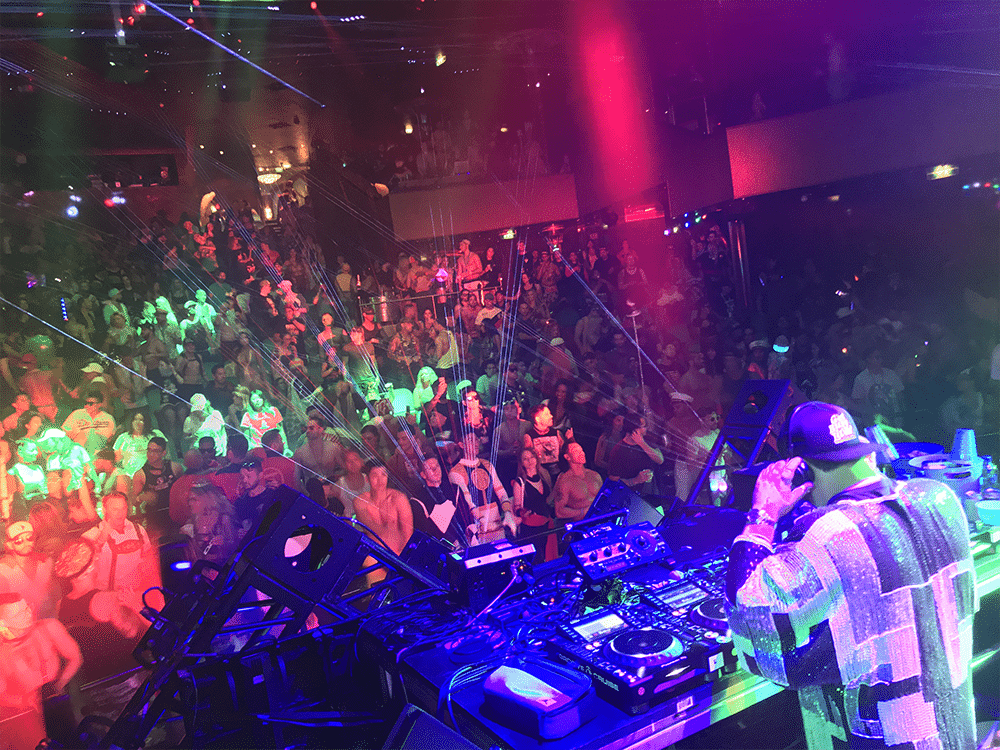 The Shralpin team reunited with the Groove Cruise fam for a sailing of epic proportions on the Norwegian Pearl the weekend of October 10-14th. We had no idea what to expect for this year’s cruise as plans had to be rearranged at the last minute. We were routed to Ensenada, Mexico due to the threat of Hurricane Sergio potentially putting the safety of those on board at risk. The change of plans didn’t stop the nonstop 96-hour party on board from occurring.

When we arrived at the pier to check in, a feeling of pure enthusiasm could be felt in the crowd as everyone waited in line to board the ship. Attendees were decked out in their best day one “Show Your Colors” theme costumes. You could hear house music bumping in the distance as we made our way through customs and the check in line for pre-boarding. Contagious smiles and laughter filled the room in anticipation of the seafaring voyage that lied ahead of us.

Show Your Colors/Out of This World

Upon boarding the massive Norwegian Pearl, we took the time to tour the stunning interior and exterior of the ship. A good majority of the people on board were already getting the party started by popping bottles and hyping each other up.

The cruise was in swing after leaving the harbor. We caught some amazing sets from Benny Benassi, MK, Laidback Luke, and Cocodrills Thursday evening. A Kung Fu class taught by Laidback Luke and the X Box tournament hosted by MK were the highlighted artist events of the evening. As the sun set, Groove Cruisers donned creative intergalactic costumes in accordance with the “Out of this World” night theme.

Tutus & Ties/Pirates of the Caribbean Day

Thursday began with a cheerful, classic greeting of “GOOD MORNING GROOVE CRUISERS” from the one and only Jason Beukema echoing over the ships PA system. Starting the day at the brunch buffet on deck was a great way to fuel up for the for the crazy day party with Duke Dumont at Papas N Beer that lied ahead of us.

Watching Groove Cruisers make their way to Papas N Beer dressed in tutus and ties themed outfits was a sight to see for locals. We were greeted by street vendors selling everything from jewelry to pottery as we approached the club. Papas N Beer was the perfect venue for everyone to come together and rage. Duke Dumont blessed us with a sick set that got everyone in the party mood.

After an eventful day of celebrations in Mexico, we re-boarded the ship and set sail in the open sea once again. The night theme, Pirates of the Caribbean, was quite fitting for a night back at sea. The Captain’s Cocktail party popped off with a groovy disco set from Scotty Boy B2B Jeremiah Red.

Factor B, Kristina Sky, Monoverse, and Cosmic Gate delivered elevating sets that all Buccaneers on board to got down to. The Whet Oasis was serving up non-alcoholic wellness shots with a side of incredible body buffing and light therapy.

Neon Me/Shine the F*ck Up

The Main Pool deck got crazy on Friday afternoon. Everyone was dressed in their best neon outfits for the classic trance party and then changed into shiny outfits for the evening.

We made some awesome artist discoveries during Friday evening. There was not a still body in the house as Drums of the Sun lit up the crowd with an unbelievable tropical set. Afterwards, Electric Polar Bears put on a funky future and tech house set that had the crowd going wild. Nothing but good energy pulsed throughout the ship from dusk to dawn as the crowd danced the night away to some delightful music.

The main buffet was located next to the pool for easy access to munchies at any time of the night. It was a real treat to grab a plate of pizza, fruit, or dessert to chow down on while watching our favorite sets on deck on Friday and over the whole course of the cruise.

Back to School Parade/Team Up

Saturday was by far one of our favorite days on board the Norwegian Pearl. We awoke to Captain Green Velvet’s gracious offering of delicious rum punch being passed out to Groove Cruisers at the pool deck. The remarkable Desert Hearts takeover was swinging into gear as the afternoon sun beamed down on the pool deck.

Groove Cruise is known for its interactive events that unite everyone sailing on the ship. Several artist events were being held including the artist soccer game and a ping pong tournament hosted by Shiba San. There was even a bowling tournament, interactive street art, deep house yoga, and a fashion show.

Every stage on the ship was going off in celebration of our last night aboard the ship. The Stardust Theatre was on fire as Sage Armstrong and Shiba San took over and ignited the funk all around. The Silent Disco was also in full effect in the luxurious Bliss Lounge. Finally, Green Velvet played a memorable classic closing set that was the cherry of top of our Groove Cruise experience.

Whet Travel’s founder Jason Beukema and his team put in countless hours of hard work to make Groove Cruise 2018 a success. The vibes on board were unbeatable and it truly felt like a family reunion. We are extremely grateful to have been apart of this once in a lifetime sailing and can hardly wait for the next cruise to set sail.

Don’t miss out on Groove Cruise Miami’s 15th Anniversary on January 10-14th 2019 aboard the beautiful Celebrity Infinity. This year’s ship will be sailing out of Fort Lauderdale to Key West and Cozumel, MX. Purchase your cabins here. See you on board, Groove Cruisers!