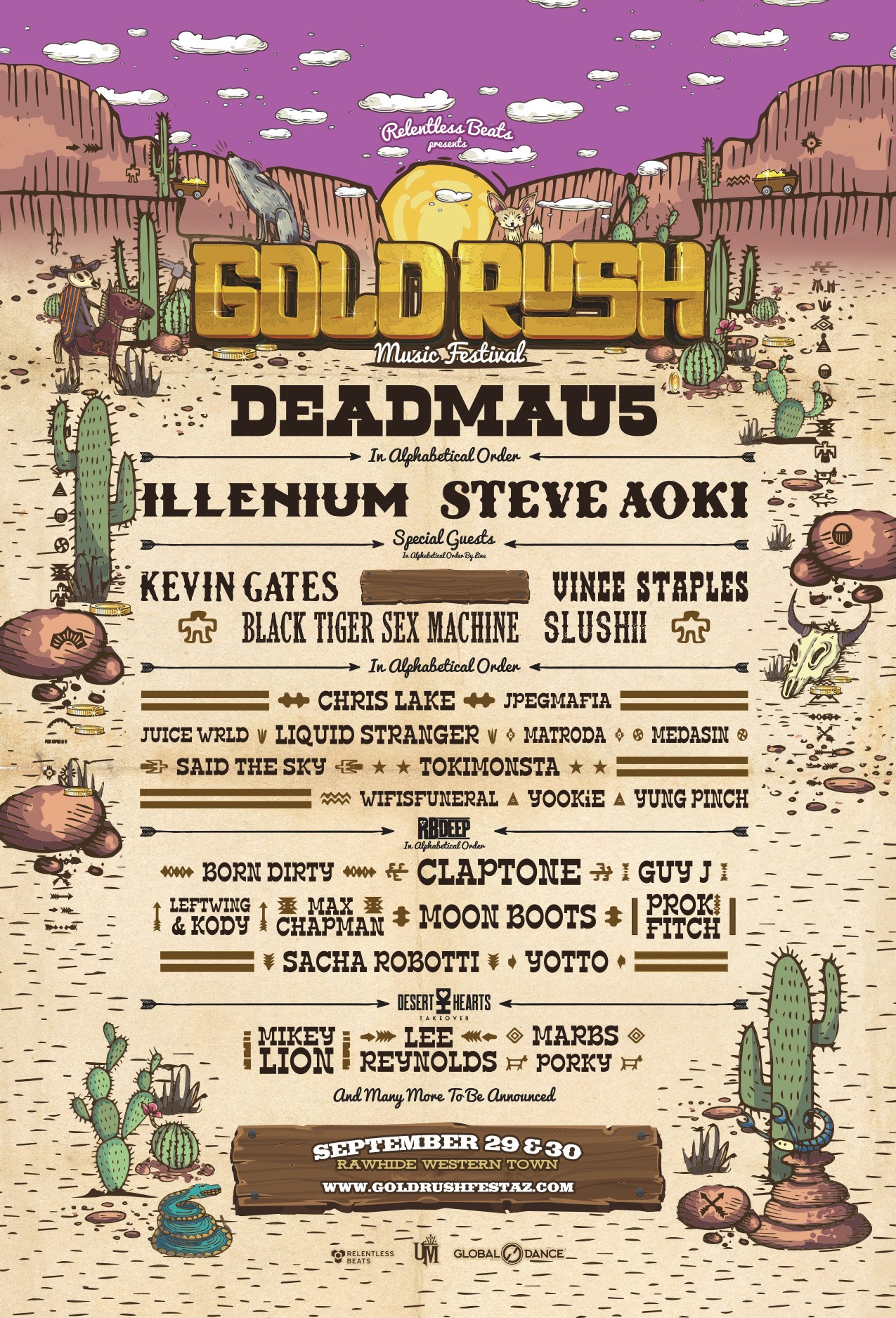 Phoenix, AZ (May 31, 2018) – After stepping out strong, tapping Deadmau5 and Steve Aoki as the first headliners for the second annual Goldrush Music Festival, Relentless Beats has released the first round of artists for 2018. Returning to Rawhide Western Town in Chandler, Arizona, September 29 and 30, one of 2017’s best received new festival experiences pushes further into the Wild, Wild West with a goldmine of electronic dance music and hip-hop talent from across the globe. #CanYouDigIt.

Also adding to the Goldrush Lineup is Relentless Beats’ premiere house, techno, and underground brand, RBDeep, which will host a stage with performances by Born Dirty; Claptone; Guy J; Leftwing & Kody; Max Chapman; Moon Boots; Prok | Fitch; Sacha Robotti and Yotto. New to the Goldrush experience is the Desert Hearts Takeover, featuring: Mikey Lion; Lee Reynolds; Marbs and Porky.  A second round of artists and will be announced in the coming weeks.

“The energy and excitement behind Goldrush are unlike anything we do,” says Relentless Beats founder Thomas Turner. “As the lineup continues to grow, I have no doubt we will be attracting a new group of fans to join the Goldrush family.”

General admission passes are now available, starting at $139 for a two-day pass, plus fees. VIP passes will be available at two levels: Standard VIP, including everything that a GA ticket provides plus express VIP entrance, a commemorative lanyard, access to VIP lounge, access to VIP viewing deck, premium restrooms and passed desserts in the VIP areas. Platinum VIP includes everything that the Standard VIP pass includes, plus: complimentary drinks, side stage viewing at the Golden Gorge stage, access to artist hospitality lounge, steakhouse quality dinner, exclusive festival gift bag, and festival concierge. VIP options are available starting at $219 for a two-day pass, plus fees and you must be 18 for Standard VIP and 21 and up for Platinum VIP to purchase. Table service will be available at the Golden Gorge stage. Tickets are on sale now and are available online at www.relentlessbeats.com. Goldrush is an 18+ event.