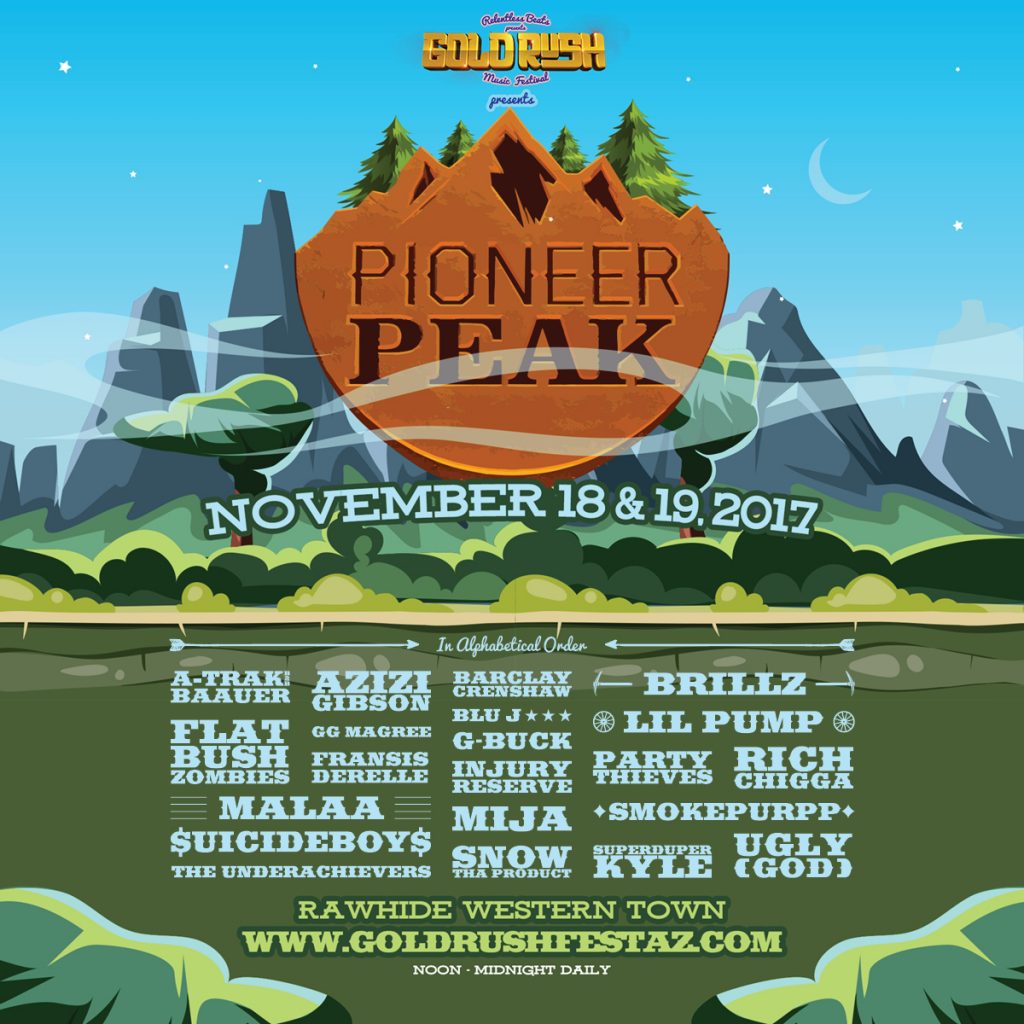 Phoenix, AZ (October 10, 2017) – Building off of the Wild West concept created for this brand new experience, Relentless Beats has announced details and the lineups behind the three main stages for the two-day event at Rawhide Event Center in Chandler, Arizona this November 18 and 19, 2017. Tapping musical talent from across the globe, each of the four stages will have its own distinct musical focus and vibe, ranging from electronic and dance to hip-hop and bass and of course the RBDeep signature sounds of techno, house and underground. A fourth stage featuring local talent will be announced in the coming weeks. Goldrush Music Festival stages and lineups are as follows:

A place thought long to be a myth exists in the deep canyons of the Wild West. With the sonic echo of loud vibrations, mesmerizing lights, and the most sought after resource in all of Arizona… pure gold, welcome to the Golden Gorge, featuring: Marshmello; Migos; Dillon Francis; Lil Uzi Vert; RL Grime; Drezo; Droeloe; Ghastly; Habstrakt; Hippie Sabotage; Judge; Keys N Krates; Lost Kings; Rezz; San Holo and a special performance by Excision.

Leading up to the inaugural Goldrush Music Festival, Relentless Beats will be hosting a series of Goldrush Expeditions. Kicking off with Ghastly, K?d and Fight Club at The Van Buren on September 30th, before journeying to Salt for Tacos y Tequila with TM88 this past Friday, the series includes a mix of showcases and a DJ competition, all building towards one of the biggest events the Valley has seen. The next expedition will be October 20th, at The Van Buren and feature: Drezo; Wax Motif; Gladiator; Nukid; and Gerry Gonza. A final expedition will take place the night before the festival with Gina Turner at BFF at Bar Smith. Finally, the Goldrush Music Festival DJ Competition Finals will take place November 4th at the Monarch Theatre, with the winner receiving a slot at an upcoming Relentless Beats festival.

General Admission passes for Goldrush Music Festival are on sale now for $179, before fees. VIP passes will be available at two levels: Standard VIP, including everything that a GA tickets provides plus express VIP entrance, a commemorative lanyard, access to VIP lounge, access to VIP viewing deck, premium restrooms and passed desserts in the VIP areas. Gold VIP includes everything that the Standard VIP pass includes, plus: complimentary drinks, side stage viewing at the main stage, access to artist hospitality lounge, steakhouse quality dinner, exclusive festival gift bag, and festival concierge. You must be age 21 and up to purchase Gold VIP passes. Table options overlooking the Golden Gorge stage are currently available. Single day passes are now on sale for $89 and $79, before fees, for Saturday and Sunday respectively. All details and ticket types are available online at www.relentlessbeats.com. Goldrush is an all ages event. Fans under the age of 18 must be accompanied by an adult.