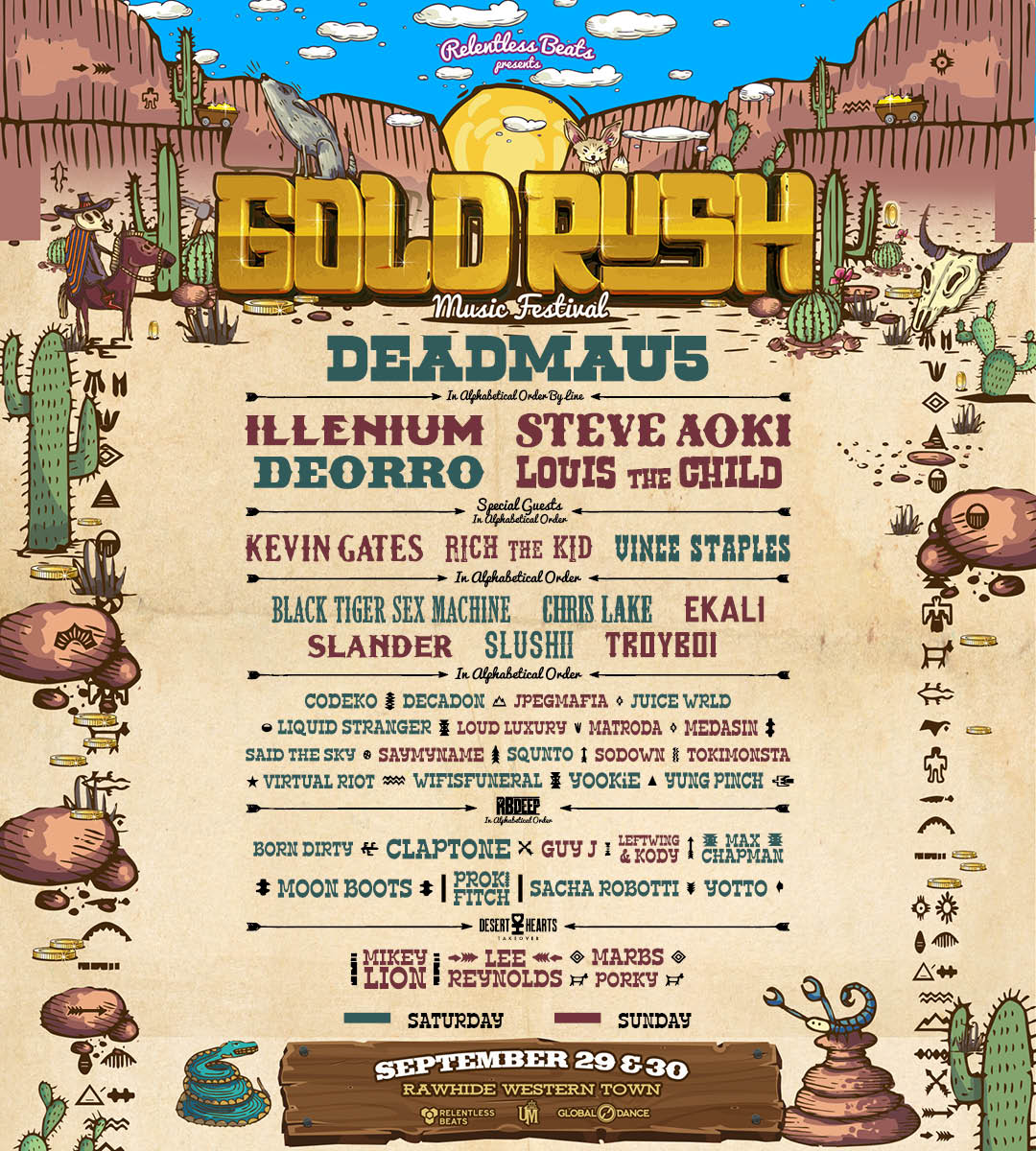 SUNDAY
Illenium; Steve Aoki; Louis the Child; Kevin Gates; Rich the Kid; Ekali; Slander; Troyboi; Jpegmafia; Loud Luxury; Matroda; Medasin; Saymyname; SoDown; Tokimonsta; Guy J; Leftwing & Kody; Mikey Lion; Lee Reynolds; Marbs; and Porky.
On Sunday, September 30th, the darling of the West Coast house and techno scene, Desert Hearts, will takeover the The Hideout stage.  Featuring the DH family of: Mikey Lion; Lee Reynolds; Marbs; Porky and special guests: Guy J and Leftwing & Kody, the crew will bring its intimate experiences of sonic joy to Goldrush 2018. And once the festival is over, the party continues with the Superstitions After-Party- another Desert Hearts takeover featuring the original core four of the movement.
General Admission passes for Goldrush Music Festival are on sale now for $159, before fees. VIP passes will be available at two levels: Standard VIP, including everything that a GA ticket provides plus express VIP entrance, a commemorative lanyard, access to VIP lounge, access to VIP viewing deck, premium restrooms and passed desserts in the VIP areas. Platinum VIP includes everything that the Standard VIP pass includes, plus: complimentary drinks, side stage viewing at the Golden Gorge stage, access to artist hospitality lounge, steakhouse quality dinner, exclusive festival gift bag, and festival concierge. VIP options are available starting at $219 for a two-day pass, plus fees and you must be 18 for Standard VIP and 21 and up for Platinum VIP to purchase. Table service will be available at the Golden Gorge stage. Single day passes are now on sale for $89 (GA), $149 (VIP) and $79 (GA), $139 (VIP), before fees, for Saturday and Sunday respectively. All details and ticket types are available online at www.relentlessbeats.com. Goldrush is an all ages event. Fans under the age of 18 must be accompanied by an adult.
Goldrush is produced by Relentless Beats, Universatile Music and Global Dance. Visit www.goldrushfestaz.com for the most up-to-date information. Stay connected on Twitter and Instagram at @GoldrushFestAZ and on Facebook at www.facebook.com/GoldrushFestAZ.
Click to rate this post!
[Total: 1 Average: 5]