Feeling the Love at Crush Arizona 2018 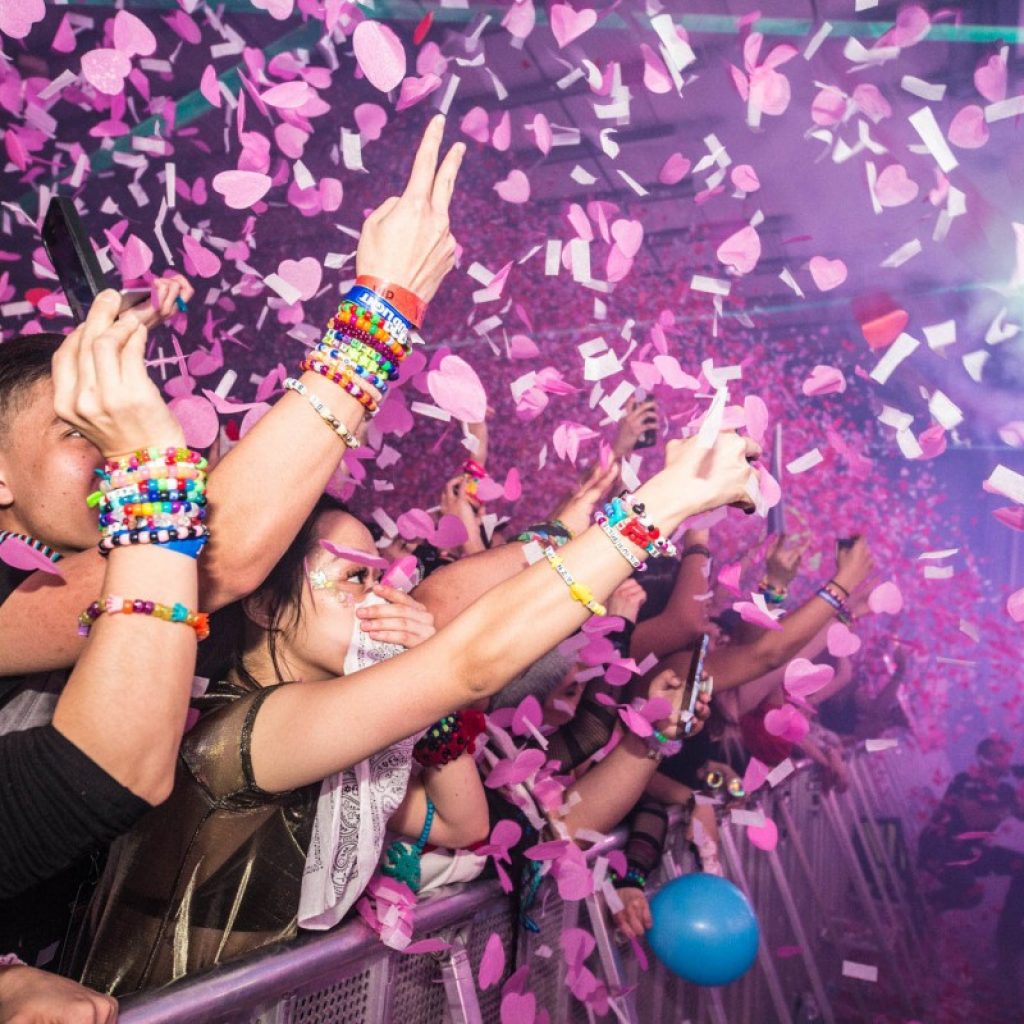 The Shralpin team trekked to Chandler, Arizona to check out this year’s installment of Crush Arizona, a Valentine’s themed EDM event put on by Relentless Beats and Insomniac. It was a mildly chilly Saturday on the eve of the event, but that didn’t seem to stop thousands of attendees from donning their best red, white, and pink rave attire at this year’s biggest Crush event to date. Crush has become a very popular event throughout the past nine years and is an Arizonian favorite as far as Valentine’s celebrations go. The lineup featured a wide variety of artists such as Kaskade, Carnage, Getter, Crakdat, Grandtheft, Volac, and Gerry Gonza.

Love was in the air walking into the meticulously laid out venue.

The Rawhide Event Center transformed into a Valentine’s wonderland with themed posters and decorations covering the entire venue. An illuminated Tree of Love was located towards the center of the outside portion of the venue for couples and singles alike to write love notes on. Merch, food, drinks, and massage booths were located across the festival and made this year’s event even more delightful. There was also a photo booth that had a big, fluffy red couch decorated with chic decor to capture charming photos with your crush or rave fam.

Crush had some of the best vibes that we have experienced at an EDM show.

Veteran ravers spread PLUR by giving out homemade kandi bracelets to those around them in exchange for cheerful smiles, gum, water, and warm bear hugs. Contagious smiles and high fives were given by many beautiful souls as we navigated our way through the crowd. A wide array of creative and hilarious totems was brought into the venue that were a surefire way of putting a cheeky grin on your face. Strangers turned into new friends and love connections as the night progressed. Couples and singles alike embraced and got down to the groovy beats all evening long.

The gorgeous stage layout set the them and mood for the evening.

The stage included a massive heart-shaped LED screen behind the DJ decks that was surrounded by multiple tall LED panels. An impressive array of vibrant lights, lasers, and smoke cannons never failed to stun the audience. Heart shaped confetti shot of out cannons that produced a loving and joyous mood as it was shot into the crowd. The venue became even more illuminated by flow artists artistically expressing themselves with their LED toys.

The festival lineup catered to a variety of tastes with genres such as house, trap, and dubstep.
Phoenix based artist Gerry Gonza, best known for his hit single “Bad B*tches,” kicked off the night the with some melodious house beats. Afterwards, Canadian producer/DJ Grandtheft warmed up the crowd with a set full of his Top 40 Dance remixes and original songs including “Keep It 100.” Up next on deck was Russian duo Volac who turned up the volume with their powerful, energetic deep and bass house sounds. Cleveland, Ohio native Crankdat preceded Volac with a ground shaking trap heavy set that made the speakers vibrate. Getter, hailing from San Jose, California, came on next, playing a trippy set that consisted of face melting dubstep, trap, and electro house.

Finally, Chicago native Kaskade put us all in our feels by closing out the night with a special, heartfelt set. Kaskade played many of his hit songs including “I Remember,” “Room for Happiness,” and “Last Chance” along with the sickest EDM mashups known to mankind. Seeing the legend himself play once again was magical and an incredible way to close out an amorous evening.

This event was a prime representation of the rapidly growing and friendly rave community in the Phoenix area. Shralpin would like to give a huge shout out to Relentless Beats and Insomniac for making an unforgettable EDM Valentine’s celebration possible. We felt the love this year at Crush AZ and are confident that you did, as well. We can’t wait to return for next years event and hope to see you there!

Don’t forget to check out the exciting upcoming events put on by Relentless Beats this coming year. Visit http://relentlessbeats.com/events/ for more information.