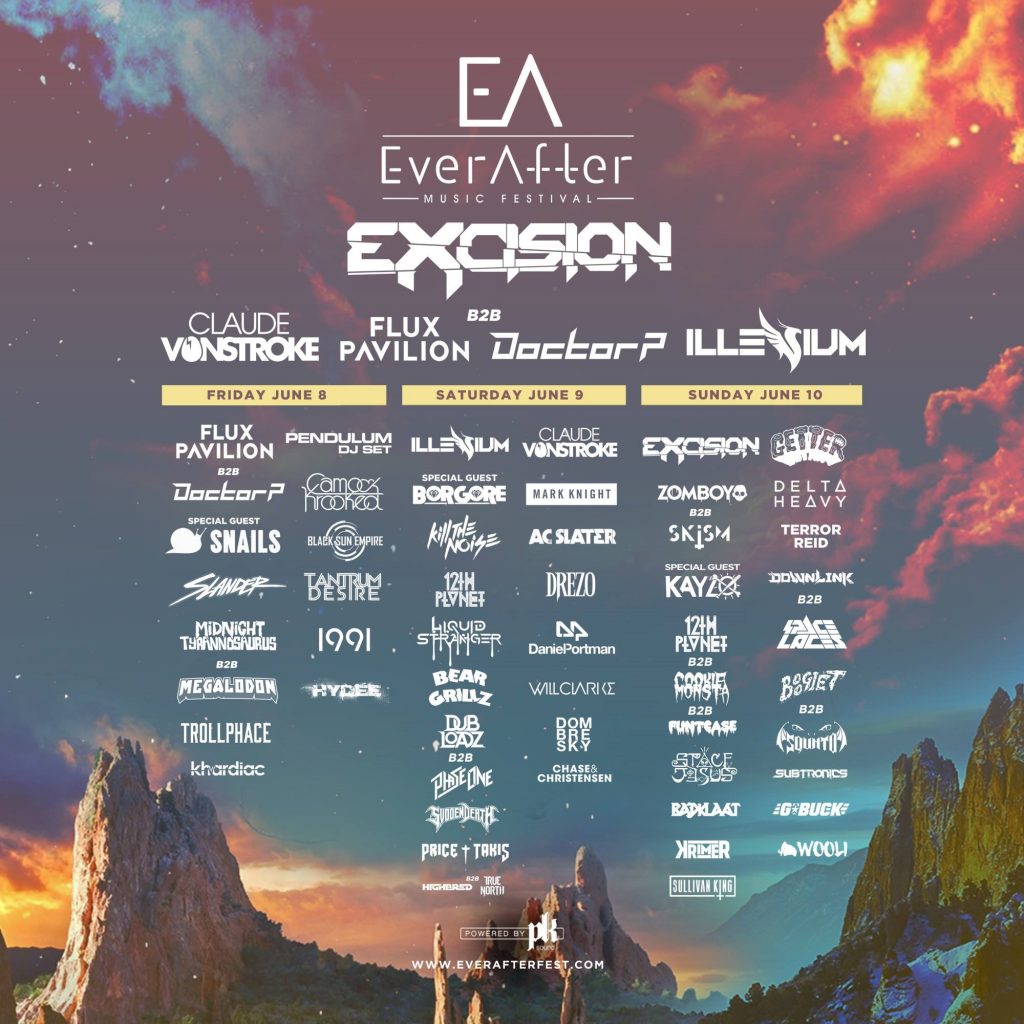 Toronto, ON (April 16, 2018) – As festival season quickly amps up for Summer 2018, Ever After Music Festival is thrilled to surprise fans with an extended line-up and special back-to-back (B2B) performance from Downlink and Space Laces. The festival will also feature a second drum and bass (DnB) stage for the June 8 show which will include DJ sets fromPendulum DJ Set, Camo & Kroo ked, Black Sun Empire, Tantrum Desire and 1991. Taking place in Kitchener’s Bingemans (425 Bingemans Centre Drive) from June 8 to 10, these new additions are part of Ever After’s already impressive line-up which is topped off with Canadian EDM powerhouse Excision, along with other highly anticipated performances from Claude VonStroke, Flux Pavilion, Doctor P, Illenium, and many more.

“Our goal is to make Ever After bigger and better every year.  From stacked line-ups, bigger stages, to unforgettable performances, we want to make this festival the ultimate weekend getaway for music lovers everywhere,” says Ever After’s organizer Gabriel Mattacchione, President of Beyond Oz Productions Inc. “Our mandate has always been about giving festival goers the best experience possible. I believe we have so far and look forward to growing it more every year.”

In addition to the new artist announcements,  Ever After is also proud to announce that they’ve partnered up with PK Sound, an innovative audiovisual technology company, to help provide an uncompromising sound experience at the festival. In an effort to make sure that sound levels in surrounding neighbourhoods be kept down to 55 dBA, PK Sound will be implementing their newest technology which will allow sound engineers at the festival to manually control the direction of sound and concentrate it to the area within the festival only. Engineers will be able to control sound from the front of the house, allowing them to control sound in real time. PK Sound is an owner-operated sound manufacturing company, well known for its full bodied and intelligible sound technology.

“Our team has been working diligently alongside the city of Kitchener to combat resident concerns regarding noise. In an effort to offset those concerns, we’ll be using PK Sound’s state-of-the-art sound technology which will help ensure that noise levels don’t surpass city mandated limits in surrounding neighbourhoods,” says Ever After’s organizer Gabriel Mattacchione, President of Beyond Oz Productions Inc. “Their new sound technology will also make sure the festival experience isn’t compromised in any way. This is a win-win for us.”

Back for it’s fourth consecutive year, Ever After Music Festival is the ultimate escape from the daily hustle and concrete jungle, to the scenic landscapes of Bingemans where festival goers are transported to a utopian fairytale-themed paradise. Recently included in BlogTO’s “The top music festivals in Ontario for 2018”, the Ever After experience is unlike any other, where festival goers can expect theatrical performers, theme inspired dancers, state-of-the-art stage productions, exclusive VIP lounges as well as a waterpark, midway, games, and variety of vendors. Combining stunning visuals and high class performances, Ever After consistently brings in some of the biggest international EDM performers with previous headliners including ZEDD, Skrillex,BASSNECTAR, Diplo, DJ Snake and more. Quickly cemeting themselves as one of the country’s top music events, Ever After Music Festival attracts upwards of 40,000 festival goers from around the world.

Tickets to the festival can be purchased by visiting www.everafterfest.com.
Tickets range from:

About PK Sound
PK is an owner-operated sound manufacturing, touring, event production and rental company. We pride ourselves on being a fresh alternative to the status quo, providing creative and innovative sound systems, A/V, design and stage fabrication, in an ever-evolving marketplace. Our brand of audio system is well known for its full bodied and intelligible sound; a result of implementing high efficiency components, new technologies and focusing on the current demands of artists and event attendees. PK is a fully integrated production house, staffed with qualified, professional and creative engineers, production experts, designers, technicians and fabricators. The diversity in this practiced team also make PK the best choice for permanent audio, video, lighting and creative installations of any size or scope.

PK is dedicated to the art and science of audio, and endeavors to capture the spirit of imagination and ingenuity in everything we do. www.pksound.ca