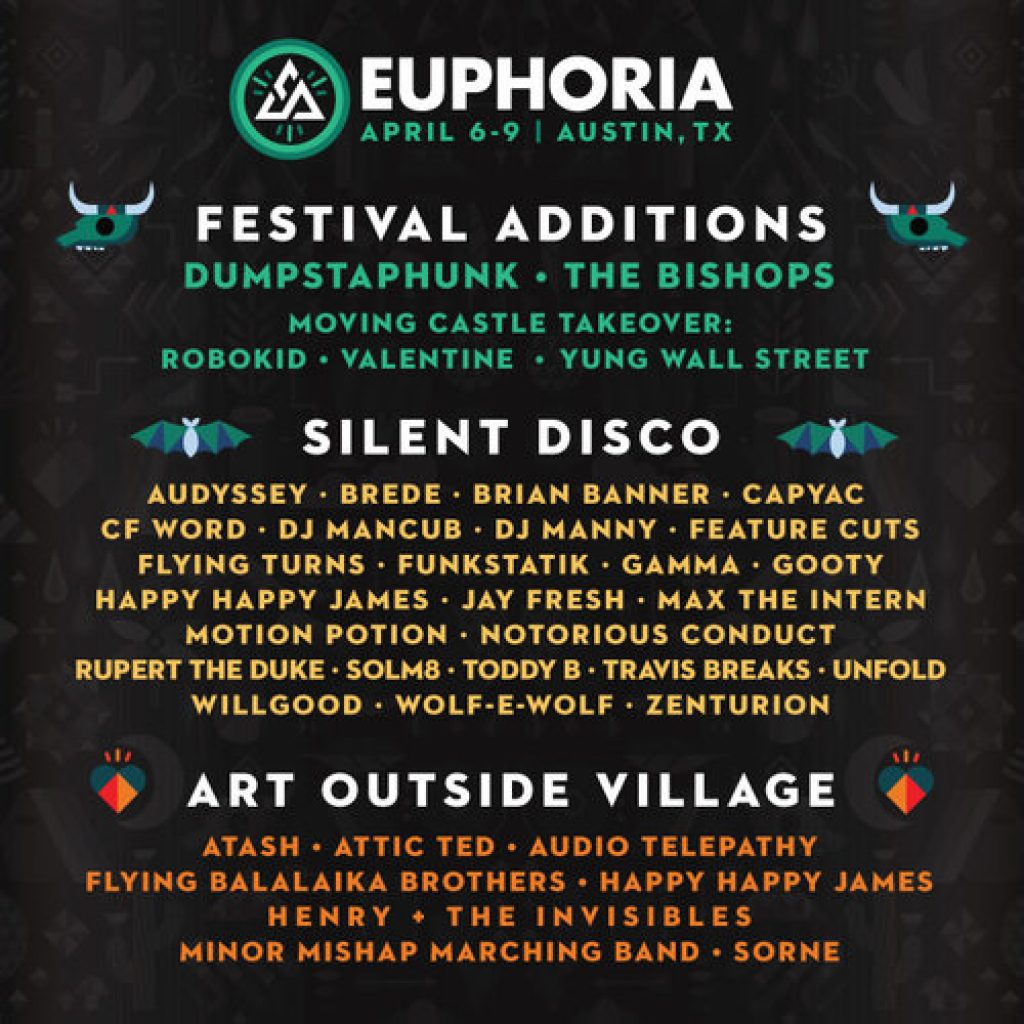 : a feeling of well-being or elation. (Merriam-Webster)

The sixth annual Euphoria Music and Camping festival took place at Carson Creek Ranch in Austin, Texas on the weekend of April 7th-9th. Thousands of attendees from all walks of life came together to enjoy music, art, workshops, silent disco, food, and everything in between. Total attendance hit 50,000 this year! This year’s lineup comprised of a variety of headliners including the following artists: Alesso, Chromeo, Pretty Lights, Wiz Khalifa, Young Thug, Zeds Dead, The Disco Biscuits, The Floozies, Knife Party, Moby, Oliver Heldens, and Post Malone.

Nothing but good vibes filled the fresh air walking across the festival grounds. Carson Creek Ranch is located just minutes away from downtown Austin along the bank of the serene Colorado River. It was established as a Spanish land grant in 1851 and is one of the oldest ranches that exists in Texas. The main pasture expands across 20 acres and is covered with pecan trees, which is where the Euphoria (Main) and Elements Stages were located. My personal favorite stage, The Dragonfly Stage, was located in the natural amphitheater overlooking the Colorado River.

The stage production and set up for all three stages created an experience of transcendence and mind-freeing genuinity. This year’s diverse lineup featured a great mix of live bands and DJ’s that catered to various tastes in music. There was something for everyone to enjoy out of the 60+ artists that performed at Euphoria this year. Watching Pretty Lights live was a huge highlight of the festival. Seeing an electronic artist perform live instrumentals with a band complemented by remarkable lighting and visuals was an unparalleled experience.

Have you ever thought about sleeping under the stars? Wanted to be so immersed in the festival experience that you don’t want to leave the venue? The beauty of camping at Euphoria was that it wasn’t necessary to leave to party to recharge. Festival goers are usually accustomed to staying at a hotel, renting a house during a festival, and finding transportation to travel to and from the venue. Euphoria was an entirely different experience in the sense that every individual had the opportunity to stay on the festival grounds from the second they arrived at the venue to camp until the festival ended and closed its doors. Camping on the festival grounds was a unique and immersive experience that brought everyone together in a special way. It was an interesting experience waking up to the sound of jets flying low over the venue accompanied by the sounds of contagious cheering and howling, which added a peculiar spark to the vibe of the festival grounds. Walking around the campgrounds felt like block party filled with flow artists, music, and friendly faces to meet where experiences were built and new friendships were formed.

The heart of all things art and expression related at Euphoria was in the Art Outside Village. Each day of the festival held a different workshop including Sanctuary Yoga, hula hooping, acro-yoga, guest speakers, and eco clean up to name a few. An art gallery, live painters, and installations filled the village with vibrant colors, shapes, and sizes. Each piece of art that I encountered was absolutely stunning and had its own vibrant charm.

The Silent Disco was hands down one of my favorite events at the festival. Located in the core of the Art Outside Village, festival attendees had the chance to dance like there was no tomorrow until 7am each night. As you entered the silent disco stage, staff members graciously greeted and handed you a pair of light up headphones and explained how to use them. The headphones streamed three different DJ’s sets on color coded channels that you choose from. On Saturday night, DJ’s from Crizzly’s label, Slice Gang, played an amazing back-to-back set together that really got the crowd going.

A wide variety of food trucks lined the festival grounds anticipating hungry festival goers. No matter what you were in the mood to eat, there was always a place to satisfy your appetite. I indulged in everything from homemade fruit smoothies to a savory chicken shawarma wrap. The only downside was the food trucks not being open late night after the main venue closed. I would recommend packing snacks to store at your camp site just in case.

Having access to VIP amenities at Euphoria had its perks. Some of the perks included express crowd entrances (great view with an ample amount of dance space), private bars and vendors, relaxing lounges, and restrooms equipped with A/C. The lounge to the right of the Euphoria stage was quite enjoyable and tranquil.

This year was my first time as a “Euphorian” and it will not be my last. Throughout the years, I have traveled across the country attending various music festivals, and without a doubt this festival was unlike any other event I have attended. I would not have traded this unforgettable experience for anything in the world.  See you next time Euphoria!