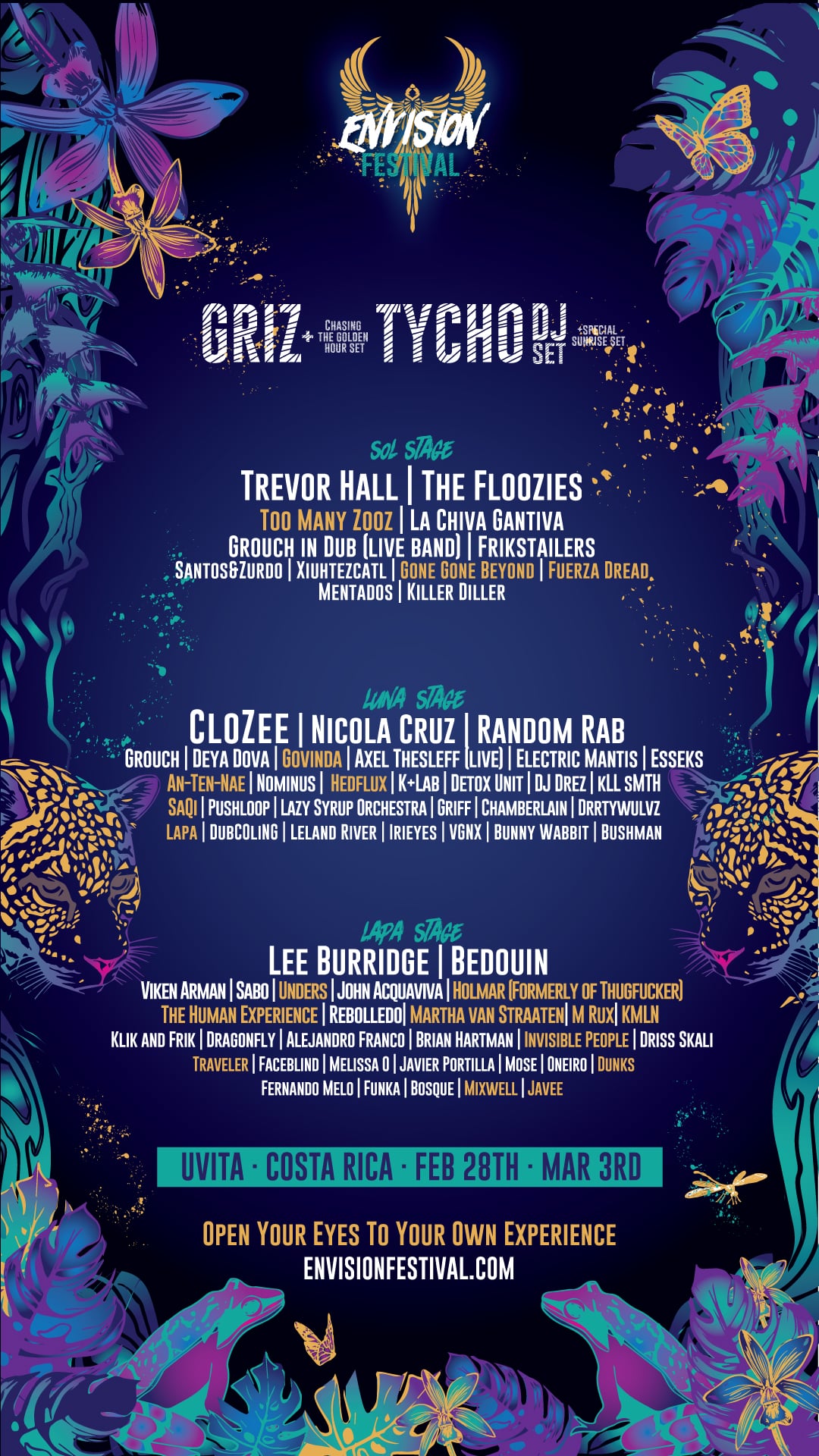 Talent on the bill includes top Latin American acts and second sets from both GRiZ and Tycho.

UVITA, COSTA RICA: Today the perennial permaculture and yoga event, Envision Festival, debuted their complete 2019 music lineup for the ninth edition of the 4-day adventure, held between February 28th and March 3rd, by the picturesque pacific shoreline in the heart of the Costa Rican jungle. The announcement offers a glimpse into an evolution on the conventional music listening experience at the world’s most eco-friendly festival. It also points to a deep-seeded mission to be a positive impact on the local community, through a shared tradition of upholding the finest sounds in Latin America alongside legendary international tastemakers of bass, house and techno. Further distinguished from its contemporaries as a leader among environmentally focused events, Envision is half yoga retreat, half permaculture conference, wrapped in a world class music festival. Set in a living, breathing jungle wonderland with three eco-kindly designed, dance music stages: Sol, Luna and Lapa. As internationally celebrated emblems of Envision’s spirit, each stage features a highly curated lineup and dazzling aesthetic personality complete with flame throwing towers, projection mapped facades and top-shelf audio technology from Audiowaska.

“Our favorite aspect of creating a lineup is watching the crowd react to fresh unexpected sounds.” Josh Wendel, Envision Festival Founder said of the announcement. “This year, we went bigger with our top headliners, and took more risks on up and coming artists. We also intentionally plan to throw a few curveballs into the schedule to keep guests on their toes not knowing when their next favorite artists might be playing. The FOMO will be real!”.

Envision Festival’s previously announced 2019 headliners are joined by big-bodied sounds like Too Many Zooz, Gone Gone Beyond, Fuerza Dread, among many more. Additions topping the bill include artists at the forefront of progressive awareness like Australia-born sacred bass virtuoso Deya Dova and the Denver-based climate activist, Xiuhtezcatl. Several featured headliners are preparing once in a lifetime performances and never before experienced opportunities for fans to have a side-by-side experience with their most celebrated musical inspirations. Fan Favorite Random Rab performs for his 9th Envision Festival, following reforesting efforts as part of the yearly tree planting ceremony. Hawaiian reggae rockstar, Trevor Hall, is slated to serve a soulful blend of roots and folk. Tycho is brewing up an infinite first ever performance and Grant ‘GRiZ’ Kwiecinski prepares a mythic ‘Chasing the Golden Hour Set’ on the Luna Stage fresh off his ‘It Gets Better’ video premiere. Both Tycho and GRiZ will offer two sets! Hailing from France, both CloZee and Viken Arman, will offer sultry shamanic bass music and distinct classical, jazz with ancient rhythms, respectively. For those with an affinity for the sounds of Burning Man, the Lapa Stage has more than a few special offerings this year. First, the Co-Founder of Los Angeles based daybreaker party series, ‘All Day I Dream’, Lee Burridge, and the purveyor of silky savory, psychedelic house beats, Bedouin, will deliver tastes of the original deep playa sensation, Robot Heart. Then, Andin House producer, Nicola Cruz returns for his second year on the Lapa stage with a flavorful sound from Latin America’s most visible art car – the Mayan Warrior.

Compared to prior years, each tiered allotment of festival tickets for the 2019 event have sold earlier than ever before. With less than 300 passes still available at the current discount we’re expecting an imminent price increase and all tickets are expected to sell out well in advance of the event. For adventurers hunting the destination experience of a lifetime, or for couples hoping to find a romantic refuge to be alone after Valentine’s Day, General admission tickets, Early Arrival passes, and VIP packages are available via the Envision Festival Website. General Admission 4-day tickets are $315 USD plus tax and fees with the option to purchase an Early Arrival Pass add-on for $79, plus tax and fees.  Traveling light can be made easy with NEW VIP packages starting at $599 plus tax and fees, including everything you need to camp, from shaded communal spaces to ALL NEW pre-built tents. Explorers with an appetite for premium comforts can also reserve treehouses and bungalows for some additional pampering during their stay at the festival.

RSVP on the Envision 2019 Facebook Event Page and sign up for the newsletter to stay in the loop with upcoming Envision Festival news, announcements and more!

I went to Envision to Experience a Transformational Festival [VICE] Festivals are ruining our Environment, WTF Connect with Envision Festival