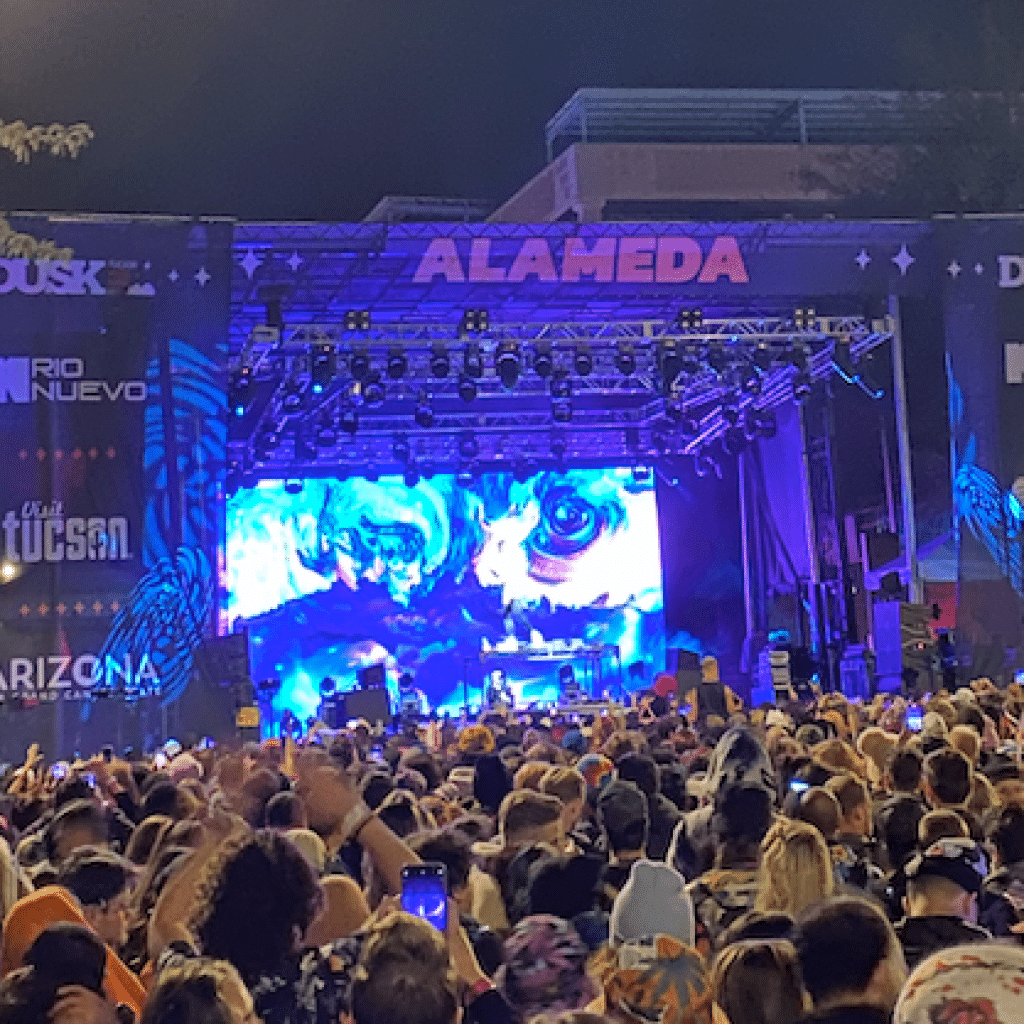 Two days, three stages, 40  artists, and all in the center of downtown Tucson welcome you to the Dusk Music Festival. Jacome plaza is not your typical venue due to the unique location nestled in downtown Tucsons surrounded by skyscrapers. This venue goes above and beyond your typical festival to deliver an amazing experience through music,  food, drinks and interactive art installations. Walking into Dusk, you are welcomed by an art installation that includes two different instagramable thrones as well as a humongous Dusk logo. As you walk through the dusk logo you are welcomed to the food vendors, medical and ranger tent as well as the first stage Presidio. There are three stages in total, the main stage was called Alameda, the second stage Presidio, and the local stage was a discovery which was nestled into a downhill walkway between the buildings of downtown! From a diverse musical and food lineup to a wide array of artists to curate multiple spectacular exhibitions spread throughout the venue, dusk doesn’t come shy of showing you a good time.

Alameda- This is the main stage of the festival! You could find the headlining artists such as Alison Wonderland, NGHTMRE, Zomboy and many other supporting acts. This being the main stage at a busy festival you could always find a place to move around and dance with your friends without being so crowded! This was a perfect setup for the main stage right in the middle of downtown.

Discovery- This stage consisted of many indie rock and pop band artists. That was definitely a different change of pace if you needed a break from the big crowds and to rock out to the bands playing. Toward the end of the night you could find many local artists playing here such as svnday_drvr, KOL, and BEN DRO. Rock bands such as TONIGHTS SUNSHINE, THE BASEMENTS, and NOAH MARTIN BAND started off the day at this stage.

Presidio- This side main stage was a short walk away from the main stage, while walking in between you could find water stations , food vendors , murals of all artists that were headlining and wacky inflatable tube men that were also headliners dancing the night away. Headlining artists at this stage consisted of INZO, Dion Timmer, Spag Heddy, Nora EN Pure, Kyle Walker plus many other amazing Acts!

Hidden stage(if you can find it)- This stage was the only stage you could not find unless you stumbled upon it or were told secretly by another festival goer! Hidden in the middle of all the vendors is a random porta potty! Enter at your own risk but trust me, its worth the risk! You might not find toilet paper but you will find a secret stage that will host some amazing talent. Definitely  a hidden gem that was very random but also very intriguing.

With artists ranging from alternative rock to indie to dubstep, to electronic dance music. There is music to satisfy all taste buds.  Not only did they provide an atmosphere for all tastes in music but as well as for all ages! Dusk provided three different stages that showcase everything from alternative rock to EDM style music and unlike most music festivals they did a very good job of dispersing all the talent around the venue.

The festival favorite had to have been the interactive art installments.

In the center of the venue, you will find amazing shops that will braid or cut your hair to a mini arcade sponsored by Cobra Arcade and a fully immersive interactive plaza! Filled with life-sized lawn games and outdoor classics like corn hole, ping pong, and ladder ball, Tucson PLAYS will be a paradise for gamers of all ages.

Not only did they have an amazing musical lineup but the food and beverage options were remarkable. While taking a break from the music, you can travel down to Tucson feast alley and try free samples of different cocktails made by Smirnoff, Bulleit, and Don julio. Not a cocktail fan, you can head over to the Barrio Brewery tent to get samples of their most popular brews such as their Blonde, Rojo, And hazy hipsterville. They have a wide variety of different beers from their sponsor Barrio brewing company which just so happens to be one of the oldest breweries here in Arizona! Barrio originated just east of Jacome Plaza bringing classic-style brews to the area. Recently Barrio has been experimenting with different flavors like the hazy hipsterville, which was the highlight beer of the weekend!

Food options for the weekend consisted of the Tucson staple the sonoran dog presented by you sly dog! Other restaurants down Tucson feast alley were culinary dropout restaurants that consisted of burgers, fries, and small tacos, Rollies Mexican patio brought you tacos, burritos, taquitos and quesadillas! Other options were pizza, sandwiches and even options for vegan friends.

Platinum VIP  includes not only express entry but also includes free drinks from local breweries as well as spirits, food,  coat check, and massages. Walking into Platinum  VIP you were greeted by tables filled with small snacks, drinks and merchandise items for you to grab for memories from the festival. Also, you get a unique viewing area right in front of the stage or you can relax off to the side in the lounge area in the comfort of your own couch.

Even though the festival ends at 11 pm which is typically a lot earlier than most. There is so much to see and do after hours.  With the festival being right in downtown Tucson, you can leave the venue and go up not even one block and find multiple different after-parties! Some of those after parties include  Dusk After Dark at the Rialto theater, Cobra Arcade, Hotel congress or drive back toward U of A and party at Gentle Bens, which had artist Dillon Nathaniel performing day 1 after party and day 2 local artists to close out the weekend. Overall Dusk was an amazing block-style type party in the heart of downtown Tucson.