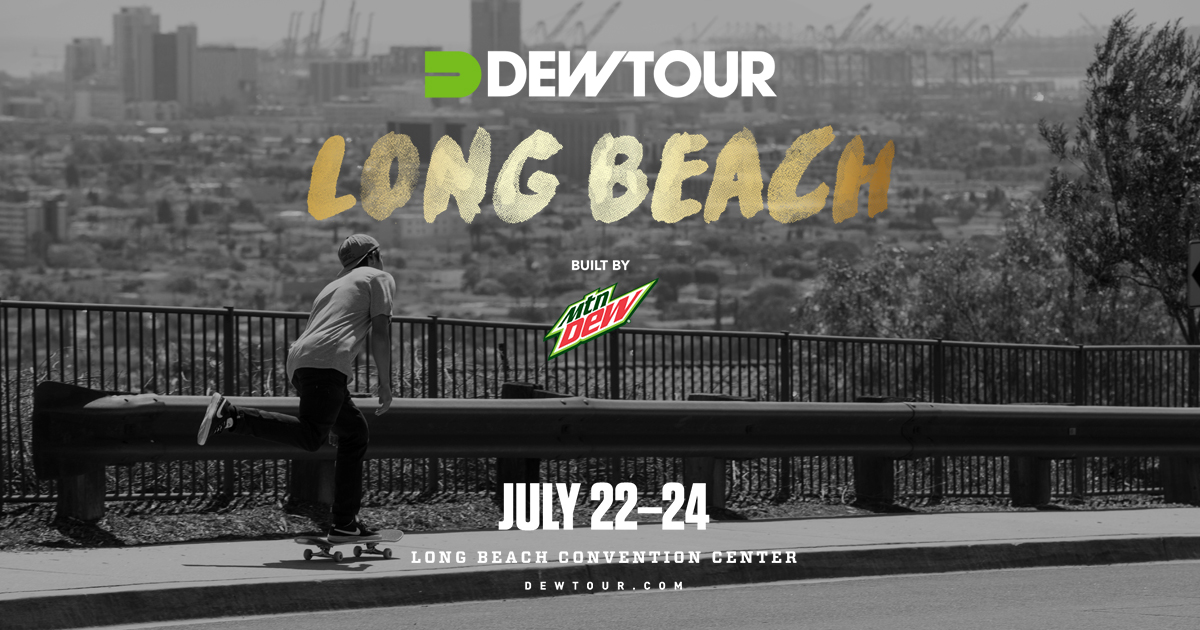 (Carlsbad, Calif.) May 31, 2017– Today, TEN: The Enthusiast Network announced its partners for Dew Tour’s FREE summer skateboard competition and festival to be held in Long Beach, Calif. June 15-18. Mountain Dew returns as the founding partner, along with lead partners U.S. Army, Motorola, Verizon, Frontier Communications, and Circle K all of which will offer on-site activations to enhance the consumer experience at Dew Tour. The event welcomes new partners STANLEY and Courtyard Marriott Downtown Long Beach. The four-day celebration of skateboarding and action sports culture will also boast a number of endemic skateboard brands onsite including Blind, Chocolate, Element, Flip, Foundation, Plan B and Santa Cruz, and a variety local businesses and community organizations.

Dew Tour’s 2017 summer skate competition and festival is a FREE four-day weekend celebration of skateboarding featuring a four-part course, Team Challenge and individual pro and amateur competitions, an interactive sponsor village and craft beer and food festival with an outdoor concert area and public skate park. More than 50 of the world’s top pro skateboarders are scheduled to compete at the event located in downtown Long Beach.

Mountain Dew, the founding partner of Dew Tour since its inception in 2005,  offers an array of on-site programs that embrace skateboarding, arts, music and technology. The Dew Tour Experience area will include product samples of its entire line, autograph sessions with DEW athletes, custom gear creation, art and live painting by creative co-op The Art Dump, led by Andy Jenkins and Andy Mueller, and a social media-based scavenger hunt.

A new skateable sculpture garden, presented by Mountain Dew and designed by Los Angeles artist Steven Harrington and California Rampworks, will be open to the public throughout the event. Following Dew Tour, the skate elements created for the garden will be donated and relocated to Long Beach’s Silverado skatepark.

Mountain Dew also presents The Art of Doing. For the first time in history, the artistry and technical precision of skateboarding will be fused together through Lightwave’s biometric technology. The process will capture and analyze biodata from DEW skaters including Curren Caples, Sean Malto and more as they skate, and will transform it into a first-of-its-kind art exhibit, created entirely by data that showcases the feeling of doing.

The U.S. Army returns with a lineup of exciting activities, including physical and mental strength challenges, a Helicopter flight simulator, custom dog tags and premium giveaways. The U.S. Army is also the presenting sponsor of Community Day, a S.T.E.M. base education initiative for Long Beach high school students and local youth organizations, and a Father’s Day skate session.

Motorola and Verizon present the computer generated “By the Numbers” course preview that breaks down the four-discipline Dew Tour skate course, which can be viewed at DewTour.com and on the Dew Tour app starting the first week of June. On-site, fans can test the Moto Z smartphone and Moto Mods that will transform a phone into a boombox, a projector and more. In addition to testing Motorola’s innovative technology, fans can visit the booth for athlete signings, a fun photo booth experience, prizes and more.

New partner STANLEY will present time-lapse and behind the scenes looks of the Dew Tour course build, available at DewTour.com the last week leading into the event.  Additionally, competitors will be skating on custom-built STANLEY skateable features during the Gaps Finals part of the competition. The Courtyard Marriott Downtown Long Beach is the official hotel of Dew Tour and will serve as the hub for Dew Tour VIPs, guests and staff.

Dew Tour’s unique team concept will be celebrated on-site not only in competition but with strong endemic brand representation. Some of the top skateboard brands in the world will be set-up in shipping containers as an homage to Long Beach’s neighboring Port of Los Angeles. Attendees can visit each brand, demo gear and meet the athletes. Brands onsite include: Blind, Chocolate, Element, Flip, Foundation, Plan B and Santa Cruz.

The Long Beach-area community will continue to have a strong presence at Dew Tour.  Long Beach Skate Shop will sell gear in their pop-up retail shop, and the local skateboard learning program Skatedogs will offer free skateboard clinics. Fans will be able to enjoy regional food trucks and Southern California craft beers in the new lagoon area at the venue.  Local skateboard foundations, including Sheckler Foundation, A.Skate, ASK Foundation and Boarding For Breast Cancer will also be participating.

Dew Tour is an innovative contest series and content platform that brings together the world’s best skateboarders, snowboarders, skiers, artists, brands and fans in a celebration of creativity and style.

About TEN: The Enthusiast Network