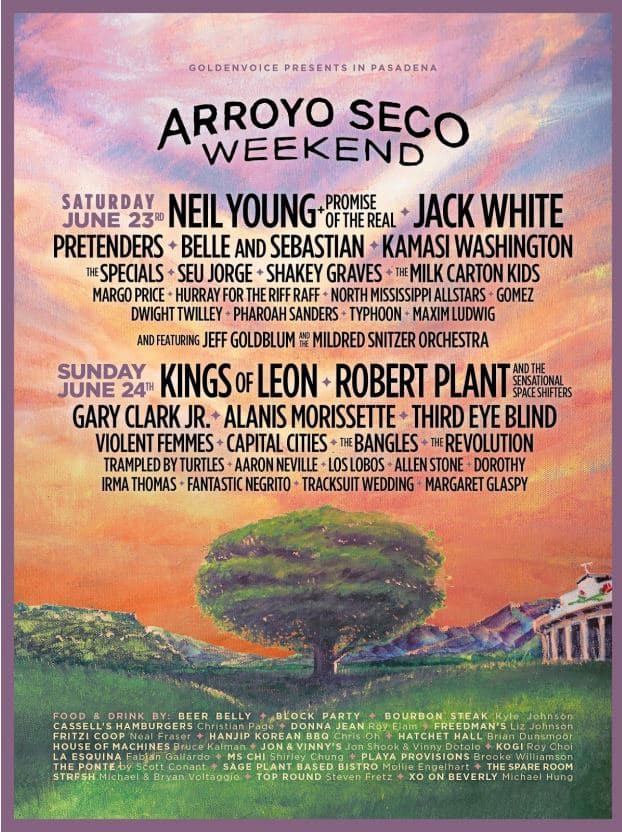 PASSES ON SALE FRIDAY, MARCH 9th ​at 10am PT

Pasadena, CA – March 1st, 2018​ – Following a hugely successful, sold out inaugural year in 2017, Goldenvoice​ has unveiled its line up for this summer’s Arroyo Seco Weekend​. Coming June 23rd and 24th​ to the shady oaks and parkland of Brookside​ next to the iconic Rose Bowl Stadium, Arroyo Seco Weekend​ is a world class culture event featuring three stages of live music along with curated menus from LA’s celebrated restaurants and chefs plus craft beer & wine.

Weekend and single day GA and VIP passes go on sale Friday March 9th at 10am PT​ from ArroyoSecoWeekend.com​ (Pass pricing below). New to this year is the Weekend Clubhouse VIP pass option, featuring incredible amenities, exclusive access to intimate upfront guest viewing areas at both main stages, and lots more; click here for all the details. American Express® Card Members can purchase all passes before the general public beginning Wednesday March 7th at 10am PT through Friday March 9th at 10am PT.

Free day parking will be available at the festival, plus easy access from surrounding areas by Metro Gold Line, or rideshare/taxi to a pick-up and drop-off lot. Festival venue is accessible to pedestrians, and a Bike Valet will be offered. Kidspace Children’s Museum​ will again be onsite with a tent of kid friendly activities. Children 10 and under are free with a ticketed adult. Arroyo Seco Weekend​ is truly Pasadena taking its name from The Arroyo Seco stream, meaning “dry Stream” in Spanish, that passes through Brookside Golf Course and Pasadena from the San Gabriel Mountains. New for 2018, CID Entertainment will provide Hotel Packages that bundle event admission with hotel accommodations, merchandise, and shuttle transportation. For details visit here.

“…it was mostly so pleasant and stress-free that it conjured up a whole new purpose for festival-going.” -Los Angeles Times

“If there’s a Utopian dream to this particular festival, it’s in at least pretending there’s no musical generation gap… an ideal that, for a couple of sweaty days, anyway, seemed surprisingly easy to believe.” -Variety

“Displaying quite the variety of musical genres, this weekend had something for everyone.” -AXS

“It was as much a moment to share with your family as it was to share with friends, and that seems to be the heart of what Arroyo Seco
Weekend wants to be. That’s something that few music festivals can claim.” -Consequence of Sound