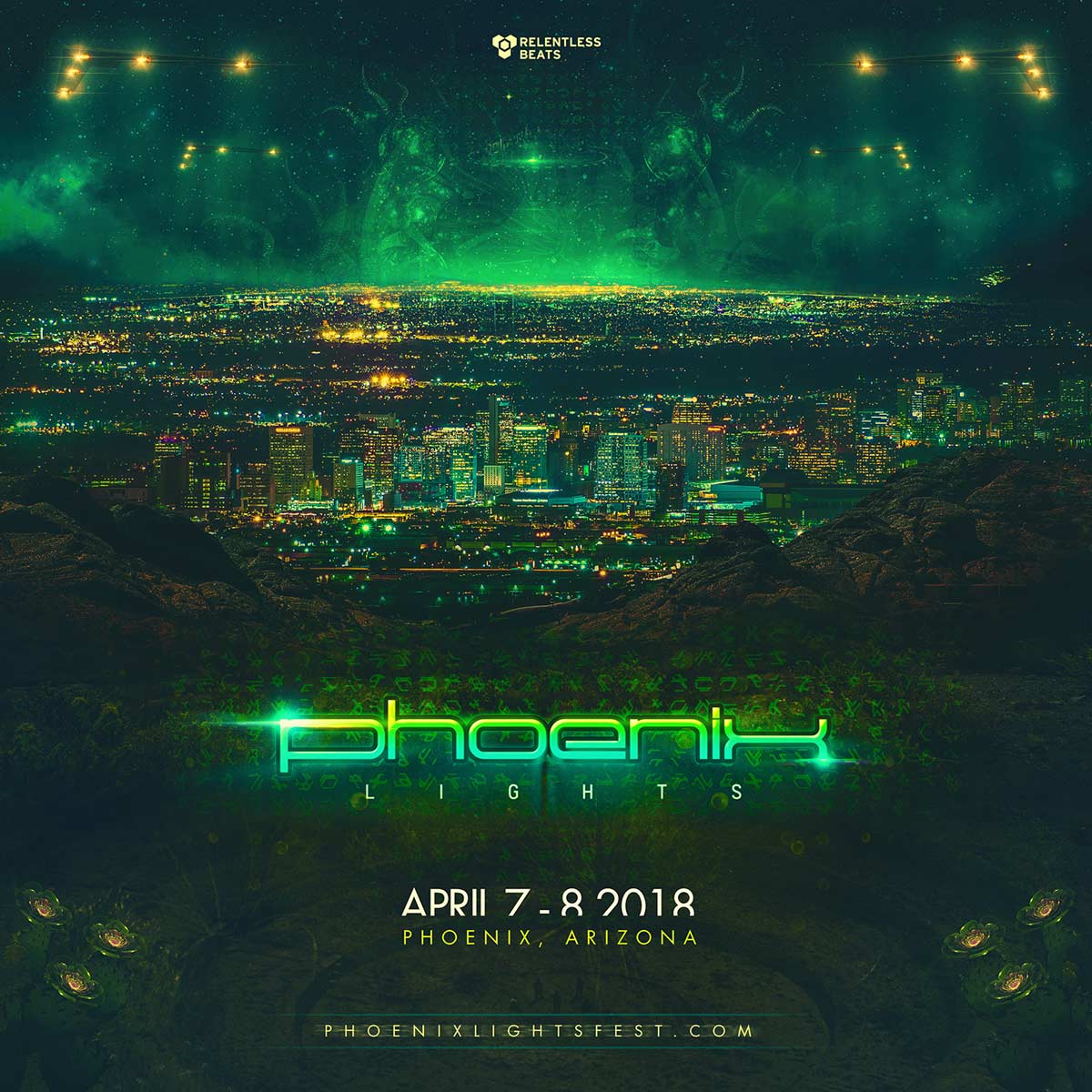 Earthlings from across the nation gathered to The Park at Wild Horse Pass in Chandler, Arizona for this year’s edition of Phoenix Lights on the weekend of April 7th-8th. With it’s theme inspired by the mass UFO sightings in Phoenix in 1997, the festival was an unrivaled experience of intergalactic proportions. Artists such as Diplo, Gucci Mane, Martin Garrix, Gramatik, and Zomboy tickled the ears of music enthusiasts of all ages. Diverse groups of supernova beings could be spotted dressed from head to toe in their best interstellar rave wear as we ventured through the venue. We also encountered many aliens who had some of the funkiest dance moves in the galaxy. There was nothing but sunshine and good vibes in the air as festival goers pranced around the festival grounds with welcoming attitudes and big smiles on their faces.

This year’s venue could be described as a cosmic playground with wide open spaces that held four different theme stages. The open grounds of the venue made access to each stage a breeze. The main stage, dubbed the “Mothership,” had a futuristic looking portal entrance that led to a huge grassy area. Surrounded by two VIP areas, the Mothership staged lived up to its name as it was created to look like a UFO and had plenty of space to frolic and dance around in. To the left of the Mothership was the “Invasion” stage, the second largest stage at the venue. The Invasion stage also looked like a smaller scale UFO structure in comparison to the Mothership. Across the way past the food truck village and vendor area was the house/techno stage entitled “The Colony.” The Colony was encompassed in a field of tall illuminated arches that lead into a field of tufty trees which gave the stage a sci-fi garden feel. Finally, the local stage called “The Fallout,” which was sponsored by Shady Park Tempe, had the appearance of a military installation set up.

The art installations were out of this world and gave the festival grounds the ultimate extraterrestrial vibe. A huge spaceship was parked at the entrance of the venue that served as a great photo-op location. Situated at the center of the venue was a quaint cube that had just the right amount of cozy space on the inside for festival attendees to chill inside and look at the stars through the open roof top. One of our favorite art structures was a cluster of steel drainage pipes that had colorful octopus-like tentacles protruding out of them.

The variety of food and merch vendors did not disappoint at this year’s Phoenix Lights. Food trucks lined up to serve hungry patrons with every type of cuisine imaginable. Every palate was pleased with dishes such as the vegan sushi rolls served at Danny’s Vegan to the pizza cones from Kono Pizza. Dragon’s Breath was even offered for dessert, which is a fruit flavored cereal mix dipped in liquid nitrogen that releases a thick fog mimicking a dragon’s breath when eaten and exhaled. Among the numerous vendors at the festival were handcrafted clothing companies, massage tables, and Boom Boom aromatherapy nasal inhalers.

Saturday kicked off on a high note with many unforgettable performances from our favorite artists. We arrived to the sounds of English DJ Joyryde who played everything from Future House to Electronic Rock in his outrageous set. GTA’s high energy “Yellow Set” preceded Joyryde and consisted of Moombah, Club, and World tunes. Afterwards, Seven Lions shut down the Mothership stage with his euphoric and hard-hitting set that both brought us to tears and made us dance with joy. As the night ended, we decided to check out Martin Garrix’s explosive set as well as Green Velvet’s groovy tech-house tunes.

Sunday ended with a bang as we experienced some of our favorite sets of the weekend. Midnight Tyrannosaurus shook the crowd with a filthy dub set that had everyone and their mothers headbanging their hearts out. Next up, Mexican born duo Boombox Cartel took over the Invasion stage with their heavy genre blending set that fired up the crowd. UK producer Zomboy crushed the Mothership stage afterwards with a neck breaking dirty dubstep set that did not disappoint. One of our personal favorite sets came from multi-talented American DJ/producer Diplo who gave the crowd a memorable twerk-out by playing everything from his Major Lazer hits to classics such as “Express Yourself.” Travis Scott and Bear Grillz closed out a magical weekend at Phoenix Lights. Travis Scott hyped up the crowd as he performed his hit singles including “Goosebumps” and “Butterfly Effect.” Bear Grillz charmed us while wearing his distinctive light up Grizzly bear head as he played bass thumping set to close out the evening.

Overall, Phoenix Lights is a festival that we will continue to phone home to for years to come. Relentless Beats continues to set trends in the Arizona festival scene and this year’s festival was nothing short of extraordinary. The overall production and planning of this festival was superb and perfectly simulated an extraterrestrial event. We hope to experience next years abduction with you at the new venue!